Legendary Producer Duane DaRock Releases “She With It” Single 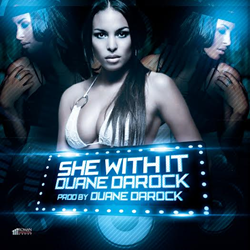 Coast 2 Coast Mixtapes announces the release of the “She With It” single by Duane DaRock. This newly released track is currently available for download. Super Producer Duane DaRock isn’t afraid to showcase his rapping skills on the new club banger. The underlying composition is guitar based, with East Coast style drum patterns.

It was on the most infamous stage in Harlem, The Apollo Theater, that Duane “DaRock” Ramos was discovered. As a young man of 15, Duane Ramos began to showcase his exceptional talents rapping and performing along the eastern seaboard. He performed his unique brand of hip-hop to a growing fan base. A quality emerged that took off and has become legendary.

His early career was guided & managed by the incomparable legend Whitney Houston. In the 20 years or so since, DaRock has made his mark; including his early work such as collaborations with hip hop icons such as Big Daddy Kane, LL Cool J, Busta Rhymes, Common and Jay-Z, and Mary J. Blige to name a few.

Be sure to get updates from Duane DaRock via his Twitter at @DuaneDaRock.