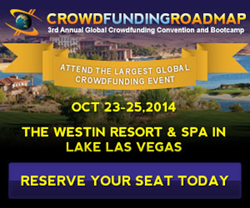 “This is the first and only crowdfunding event that provides the opportunity for people to crowdfund and pitch their campaign to a live audience during the “Startup Live Pitching & Crowdfunding Session," Ruth Hedges

According to industry experts, crowdfunding will add at least $65 billion into the global economy in 2014, and with its current growth rate, at least $3.2 trillion by 2020. But thanks to the upcoming Third Annual Global Crowdfunding Convention & Bootcamp, people across the world will now have the opportunity to connect with potential backers while discovering the ins and outs of crowdfunding.

The event is slated for Oct. 23–25 at The Westin Resort & Spa in Lake Las Vegas.

Event Producer Ruth E. Hedges explained that the goal of the annual global crowdfunding event is to cut through the clutter and confusion, making it easy to gain the knowledge, connections and tools needed to achieve crowdfunding success.

“As the world’s premier and longest running annual global crowdfunding convention, we adhere to the highest standards of excellence and education,” Hedges said.

Hedges, who is also the dean of Crowdfunding College, went on to encourage anyone who is interested in crowdfunding to participate in the industry’s premiere event.

“Whether you’re new to the concept of crowdfunding or have been involved in the industry for years, you can benefit by attending this one-of-a-kind crowdfunding all-star convention,” Hedges stressed, before adding, “It’s not your typical boring business event, and there will also be spectacular parties and lots of great entertainment that you won’t want to miss.”

Tickets for the event can be purchased at: http://crowdfundingroadmap.com/bootcamp.

The scheduling of the Third Annual Global Crowdfunding Convention & Bootcamp could prove to have perfect timing due to the fact that entrepreneurs, business owners and even average Joe’s are tapping into the industry in an effort to bring their dream into a reality.

Well known crowdfunding campaigns include: Reading Rainbow with Levar Burton, which is an effort to bring back Reading Rainbow to schools across the US; Pebble, the smart watch; OUYA, a new video game console; The Veronica Mars Movie Project; wasteland 2; The Dash, a wireless smart in-ear headphones and more.

“The crowdfunding industry is booming,” said Hedges, who founded the GCCB in 2012, and was one of the pioneers of the JobsAct.

Hedges pointed out that a few of this year’s many event highlights include: An exclusive opportunity to meet face-to-face with and learn from the most dynamic lineup of keynotes including Kevin Harrington, co-founder of Fundhub.biz and one of the original investor “Sharks” from the popular TV show Shark Tank as well as Scott McKain who is an internationally recognized expert on creating market distinction, and a bestselling author and hall of fame speaker.

Attendees, according to Hedges, have the opportunity to become educated by the most exciting and diverse lineup of speakers in the crowdfunding industry.

“Attendees will be empowered with vital content and thorough discussions on every aspect of the industry from equity to rewards, from title II and III to donation and non-profit crowdfunding,” Hedges revealed. “There’s a whole lot more.”

The spokesman noted that this year’s event will also host the “Success With Crowdfunding” course with Sherwood Neiss, Jason Best and Robert Mitchell from Crowdfund Capital Advisors.

“In addition, our exclusive “Crowdfunding Master Classes” will also include Crowdfunding College where you can become a “CCFP” Certified Crowdfunding Professional intended for professionals and entrepreneurs alike,” Hedges said. “This is the first and only crowdfunding event that provides the opportunity for people to crowdfund and pitch their campaign to a live audience during our “Startup Live Pitching & Crowdfunding” session."

“There’s a lot that we’re offering this year and it can all be seen in-depth on our event website,” Hedges said. “We plan hard all year round to deliver a healthy dose of fun because we know that nobody enjoys boring business conferences, including us! That’s why we’ve carefully crafted an environment that encourages both the highest level of education in the crowdfunding industry as well as fun-filled entertainment.”