Inspired by the children's ASL series, Signing Time, Marvel writer makes Avenger character deaf. In Hawkeye #19, empty speech bubbles and uninterpreted sign language propel readers into a world without sound, raising awareness of what it's like to be deaf. 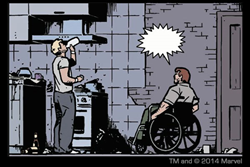 That is exactly what it’s like when you’re deaf. - Leah Coleman

In 2012, Rachel Coleman, host of the Two Little Hands series, Signing Time, met Matt Fraction, a writer for Marvel Comics, at a Signing Time concert. Fraction had been fascinated by the experience of signing with his son. He was struck by the similarities in visual communication techniques used in both comic books and sign language.

They discussed the Avenger character Clint Barton, AKA Hawkeye, who had damaged his hearing in a fight, and, for a time, wore hearing aids. Fraction said it was a shame that Hawkeye’s deafness had been “written out” and mostly forgotten.

Earlier that year, a mother requested help from Marvel after her 4-year-old son refused to wear his blue hearing aids because “superheroes don’t wear blue ears.” Marvel sent the boy a drawing of Hawkeye wearing his hearing aids. In addition, they created a new superhero in the boy’s honor called “Blue Ear.” Encouraged by this, Fraction told Coleman that he’d look for the opportunity to write deafness back into the Hawkeye character.

A year later, Fraction sent Coleman a draft of Hawkeye #19. The character was once again deaf. “I read it with my daughter, Leah, who is deaf. She saw that the speech bubbles were empty when Hawkeye’s back was turned or if he didn’t have a face-to-face conversation, and she got really excited. She said, ‘That is exactly what it’s like when you’re deaf!’”

Hawkeye #19 was released on July 30 to critical acclaim. Reviewer Timothy Merritt reflected on the unique experience the comic offers readers. “If you don’t know ASL, you will be confused, frustrated, and searching for understanding—and that’s precisely the point. There is no accompanying translation because being deaf doesn’t come with a translate button.”

After reading Hawkeye #19, Merritt and his wife, who have an 8-month-old with hearing loss, made the decision to teach American Sign Language to their son.

Hawkeye #19 is dedicated to Leah, and Coleman is thrilled. “People who may have never thought about being deaf or what that’s like are going to walk into a store, purchase this issue and open it to discover another world. Isn’t that what comics are about?”