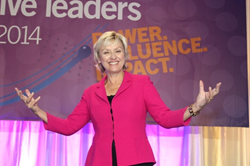 Almost half of those attending last week's NEW Executive Leaders Forum say women are afraid to be seen as "bossy.” More than 200 leaders in the mostly female audience shared their opinions at a live Town Hall polling event, July 30 in Rancho Palos Verdes, Calif. The discussion was hosted by the Network of Executive Women and led by Kendra Doyel, vice president of public relations for the Ralphs and Food4Less divisions of The Kroger Co.

Asked why "women are reluctant to embrace power," 49 percent answered "afraid to be seen as 'bossy'"; 26 percent said "lack of role models"; and 16 percent said women are "not brought up to be leaders.”

Asked how confident they were at work, 44 percent said "very confident,” 32 percent answered "somewhat confident” and 24 percent said "not as confident as I could be.” Confidence, Doyel noted, "can be just as critical to success as competence.”

"Power is usually taken by the bold,” according to half (51 percent) of poll participants. Twenty-eight percent said power was "usually given to the well connected.” Only 21 percent said it was "earned through hard work.”

"It's not your title that gives you power,” Doyel told the industry’s leaders. "It’s your ability to inspire others.”

Only 3 percent of the senior leaders present said they "usually exercise power” through "direct authority.” Nearly half of those taking the live poll (47 percent) said they usually used "persuasion and influence.” Twenty-nine percent said they usually led by "living my core values,” while 22 percent answered "servant leadership.” Strong leaders are authentic at work, Doyel noted. "When you try to be something that you're not, people pick up on that almost immediately.”

Famed editor Tina Brown said, "Influence is really about what you do with power.” Brown — legendary editor and CEO of Tina Brown Live Media — gave the closing keynote address at the NEW Executive Leaders Forum, July 31 at the Terranea Resort in Rancho Palos Verdes, Calif.

Brown has had an influential career in journalism, including roles helming Vanity Fair, the New Yorker and The Daily Beast. Brown said her experience catching popular sentiment — like the rise of celebrity journalism and the explosion of digital media — taught her the importance of recognizing an opportunity. "You need to have focus in your career. We need to own it.”

Brown is now focused on her Women in the World Summit, which brings powerful women leaders and activists together to support women and girls across the globe. Brown predicted one of this year's featured Women in World Summit speakers — Hillary Clinton — would run for president of the United States. "I think she would like to retire, but she also wants there to be a woman president. And if not her, who?" Brown said in response to an audience question.

Other featured speakers at the NEW Executive Leaders Forum included former Young & Rubicam Brands Chairman and CEO Ann Fudge; Sumeet Salwan, senior vice president of human resources, North America, for Unilever; and Al Carey, CEO of PepsiCo Americas Beverages, who was interviewed on stage by Donna Giordano, president of the Ralphs division of The Kroger Co. Other Forum highlights included a panel discussion by female board directors and a briefing on multicultural women's leadership in retail and consumer goods.

The Network of Executive Women is the retail and consumer products industry’s largest women’s leadership organization, with 8,300 members representing 750 companies. The Network has 100 national sponsor companies and 20 regional groups in the United States and Canada. It hosts more than 100 local events and two national conferences each year. For more information visit newonline.org.