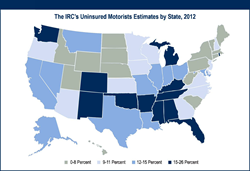 Across the United States, the estimated percentage of uninsured motorists trended down in 2010, 2011 and 2012, according to new estimates from the Insurance Research Council (IRC). In 2003, a cyclical high of 14.9 percent of drivers were uninsured, while the IRC’s most recent findings show the ratio has fallen to 12.6 percent.

Nationally, the number of uninsured peaked at 29.9 million in 2009 and moderately declined thereafter to 29.7 million in 2012. Statewide, the uninsured motorist problem varied, with the highest numbers in:

This Uninsured Motorists study also estimated the total claim payments to the uninsured. Discounting fatalities and total permanent disability claims, the IRC estimates that $2.6 billion was paid in the U.S. on 2012 uninsured motorists claims. Despite the declining trend in uninsured rates over the last decade, the aforementioned total claim payment amount is up 75 percent over the last 10 years and translated to $14 per insured individual in 2012.

“Responsible drivers who pay for insurance end up also paying for injuries caused by uninsured drivers,” said Elizabeth A. Sprinkel, CPCU, senior vice president of the IRC. “The declining trend in the percentage of uninsured motorists is a positive development for consumers; however, the heightened levels of uninsured motorists and the rising claim payments involved still remain a concern for insured drivers, insurers and policymakers.”

For more detailed information on the study’s methodology and findings, call David Corum at 484-831-9046 or email IRC(at)TheInstitutes(dot)org. For information about obtaining a copy of the study, please visit the IRC's website at http://www.Insurance-Research.org.

NOTE TO EDITORS: The Insurance Research Council is a division of The Institutes, the leader in delivering proven knowledge solutions that drive powerful business results for the risk management and property-casualty insurance industry. The Institute knowledge solutions include the CPCU designation program; associate designation programs in areas such as claims, risk management, underwriting and reinsurance; introductory and foundation programs; online courses; research; custom solutions; assessment tools; and continuing education (CE) courses for licensed insurance professionals and adjusters through its CEU business unit. The IRC provides timely and reliable research to all parties involved in public policy issues affecting insurance companies and their customers. The IRC does not lobby or advocate legislative positions. It is supported by leading property-casualty insurance organizations.