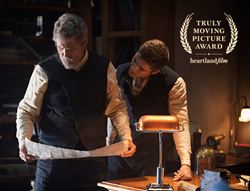 A provoking conversation starter, the film is a powerful adaptation of Lois Lowry’s classic novel. Jeff Bridges and Brenton Thwaites give excellent performances as The Giver and Jonas.

Upcoming major motion picture release “The Giver” (The Weinstein Company/Walden Media) has been recognized with the Truly Moving Picture Award by nonprofit arts organization Heartland Film. Select theatrically-released titles—entertaining films that do much more than just entertain—are honored with the designation throughout the year. Submissions are received directly from studios and producers for consideration.

Co-producing partner Walden Media spent over a decade developing the project, and Chief Operating Officer, Frank Smith, says, “We’re excited to introduce ‘The Giver’ to moviegoers next week and are proud to add the film to the list of other great book to film adaptations we have produced which have also won the Truly Moving Picture Award, including; ‘Holes,’ ‘Charlotte’s Web,’ ‘Bridge to Terabithea,’ ‘Because of Winn Dixie,’ ‘Ramona’ and ‘The Chronicles of Narnia.’”

The motion picture adaptation of “The Giver” represents the fulfillment of a 20-year-long dream for actor Jeff Bridges, who also serves as a producer on the production. “My daughters read the book, but before I had known that they had read the book, I was looking for some material in which to direct my father, Lloyd Bridges,” he recalls. “I also wanted to make a movie that my kids could watch at the time. I was looking through a catalogue of children books and I came across this wonderful cover of a book, with this old, grizzled kind of guy on the cover and thought, ‘Oh yeah, my dad can play that guy!’”

The haunting story of “The Giver” centers on Jonas (Brenton Thwaites), a young man who lives in a seemingly ideal, if colorless, world of conformity and contentment. Yet as he begins to spend time with The Giver (Jeff Bridges), who is the sole keeper of all the community’s memories, Jonas quickly begins to discover the dark and deadly truths of his community’s secret past. With this newfound power of knowledge, he realizes that the stakes are higher than imagined – a matter of life and death for himself and those he loves most. At extreme odds, Jonas knows that he must escape their world to protect them all – a challenge that no one has ever succeeded at before. “The Giver” is based on Lois Lowry’s beloved young adult novel of the same name, which was the winner the 1994 Newbery Medal and has sold over 12 million copies worldwide.

ABOUT THE WEINSTEIN COMPANY
The Weinstein Company (TWC) is a multimedia production and distribution company launched in October 2005 by Bob and Harvey Weinstein, the brothers who founded Miramax Films in 1979. TWC also encompasses Dimension Films, the genre label founded in 1993 by Bob Weinstein, which has released such popular franchises as “Scream,” “Spy Kids” and “Scary Movie.” Together TWC and Dimension Films have released a broad range of mainstream, genre and specialty films that have been commercial and critical successes. During Harvey and Bob’s tenure at Miramax and TWC, they have received 348 Oscar nominations and won 82 Academy Awards.

TWC boasts an active television production division led by former Miramax Films Co-President of Production Meryl Poster. TWC garnered nine Emmy nominations in 2013. The Weinstein Company Television produces the reality powerhouse “Project Runway,” prepping for its 13th season on Lifetime; with its spin-off series and critically-acclaimed “Project Runway All Stars,” hosted by Alyssa Milano and “Project Runway Under The Gunn,” hosted by Tim Gunn which is currently on air. TWC series that were produced in 2013 include “Mob Wives” Season 4 which VH1 has green lit for Season 5, “Million Dollar Shoppers” for Lifetime, “Rodeo Girls” for A&E and “Trailer Park: Welcome to Myrtle Manor” Season 2 for TLC. Scripted project currently in production is John Fusco’s historical action-adventure epic “Marco Polo.” Announced scripted projects in development include “Ten Commandments” a 10 part event series with each episode to be helmed by a different A-list director and focusing on one commandment and an adaptation of Daniel Stashower’s bestselling Civil War-era spy thriller “The Hour Of Peril.” TWC also developed Amy Sherman Palladino’s “The Nanny Diaries” for ABC and produced the Peabody award-winning HBO series “The No. 1 Ladies’ Detective Agency,” directed by Anthony Minghella.

ABOUT WALDEN MEDIA
Walden Media creates entertainment for the whole family through successful movies, award-winning books, and acclaimed television programs. A Walden Media production celebrates a great book well told, a great life well lived, or an exploration that expands present possibilities – all while inspiring and entertaining its audience. Past award-winning films include: “The Chronicles of Narnia” series, the “Journey to the Center of the Earth” series, “Nim’s Island,” “Charlotte’s Web,” “Bridge to Terabithia,” “Holes,” “Amazing Grace,” and the Sundance Audience Prize Winning documentary “Waiting for ‘Superman.”

Next up for Walden Media is “The Giver” - a feature co-production with The Weinstein Company, which will open in theaters nationwide on August 15. The highly anticipated adaptation of Lois Lowry’s novel stars Meryl Streep, Jeff Bridges, Brenton Thwaites, Alexander Skarsgård, Katie Holmes, Odeya Rush and Taylor Swift.