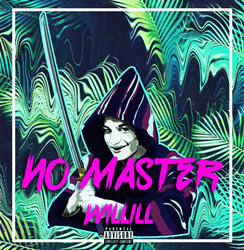 Coast 2 Coast Mixtapes announces the release of the “No Master” Mixtape by Willill. The 16 track project is currently available for download on the Coast 2 Coast website. This mixtape features appearances from Dillon Jamal and Angel P. All of the productions on this mixtape are original and produced by Jacked Bill, JackeL, CYBER GOD, Lil Netzero, Damacha, Greaf, kuRt, and ShunGu.

Hailing from the Sin City of Las Vegas, Willill is a 17 year old rapper and producer. He uses the alias “Jacked Bill” when making productions and has included some of them on this mixtape. Even though Willill got into the music industry only three years ago, he has already created a local buzz in the valley. As an artist he hopes to spread his music from coast to coast by continuing to write songs and poetry.

The new mixtape by Willill, called “No Master” is an alternative hip-hop style with west coast influences and alliterations found throughout the wordsmyth’s lyrics. Willill possess a style all his own and illustrates that on every piece of work. The productions used were arranged in a fluid manner that flawlessly transitions between songs. Will reacts to the haters around him, and the struggles he’s been through when coming up with the ideas for his songs. For more on Willill and his new mixtape “No Master” check him out on twitter at @willhesee.