Designed to blend with modern home décor, Kooldog House seeks crowdfunding to provide a stylish and comfortable space for pets. 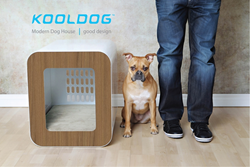 Dogs are den animals. Rather than tuck an unsightly dog crate into a utility room, we have designed the doghouse to blend with modern home decorations.

Doghouse design has been limited to dated plastic or wire containers, so the creators of Kooldog House have designed a functional yet stylish doghouse to blend with modern home décor and have launched a crowdfunding campaign to raise $20,000 CAD by September 22. Those preordering their Kooldog House through the Kickstarter campaign will enjoy 50 percent off the retail price.

Crates and doghouses give pets a space of their own to relax, but outdated plastic or wire containers do not contribute to modern home décor. “Dogs are den animals,” said Kooldog Designer Ki Park. “Rather than tuck an unsightly dog crate into a utility room, we have designed the doghouse to blend with modern home decorations.”

The design has been well received. Kooldog House has been selected as a Staff Pick from Kickstarter and is featured in several magazines, including Canadian Interiors, Modern Dog, Hamilton Magazine’s Interiors, and Western Living. One of the key features of the Kooldog House is the machine-washable slipcover made with Crypton, a super fabric made in the United States. The Crypton slipcover protects the doghouse’s cushion from moisture, stains, bacteria, and odors.

Inspired by the simplicity of modern design, the Kooldog House is both aesthetically pleasing and functional and has the option to upgrade the front face to various colors. The product is made locally in Toronto with processes that meet the highest quality control standards, from the metal fabrication to the powder coating.

To learn more about the Kooldog House, visit http://www.kooldog.ca. To contribute to the crowdfunding campaign, visit http://kck.st/UQoWLt.