IBTS has released a case study outlining involvement in one of the largest infrastructure projects in the United States, the Dulles Metrorail expansion project. The Silver Line took five years to complete and IBTS provided code inspections and special inspection oversight to ensure the rail was built to specifications. 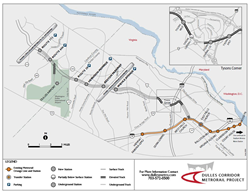 The Institute for Building Technology and Safety (IBTS) has published a case study on their involvement in bringing the recently opened Silver Line to northern Virginia. Phase 1 of the Dulles Metrorail expansion took more than five years to construct and connects Reston, Virginia to Washington, DC. Throughout this expansive infrastructure project, IBTS acted as the eyes and ears for the Commonwealth of Virginia’s Department of General Services (DGS) by providing code compliance inspections and observing special inspections of the Silver Line.

“IBTS saw Phase 1 from cradle-to-grave and was available to be onsite 24/7, as needed,” said Paul Hancher, Director of Building Department Services. “The complexity of this project called for expertise in oversight and inspections. DGS utilized IBTS’ extensive knowledge of building codes to help build a safe Silver Line for citizens of northern Virginia.”

The project involved a variety of overlapping and often conflicting code standards and a large number of stakeholders. Drawing on 30 years of quality assurance and building code expertise, IBTS helped interpret codes and bridge the gap between the jurisdictions and players without delaying construction.

During Phase 1, IBTS was involved in oversight and special inspections for concrete, tunnels, stations, as well as other Metrorail infrastructure. They inspected and tested at-grade and elevated track foundations, elevated track piers, ventilation structures, transfer power stations, control rooms and the maintenance yard.

To read the details about IBTS’ work on the Silver Line, download the case study.

About IBTS:
IBTS is a 501(c)(3) non-profit organization committed to helping communities through quality services that reduce risk, enhance public safety, and improve quality of life. IBTS is headquartered in Ashburn, Virginia with branch offices across the country. IBTS’s work is guided by a Board of Directors made up of government officials appointed by five of the most highly respected, grassroots, state and local governmental associations. The board appointing organizations include the National Governors Association Center for Best Practices (NGA Center), the Council of State Governments (CSG), the National Association of Counties (NACo), the National League of Cities (NLC), and International City/County Management Association (ICMA).