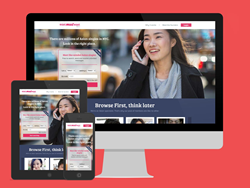 “We match people using numerous features, including those unique to the Asian American dating scene such as whether you were born in the States, when you immigrated, and what languages you speak," says CEO and Founder Mariko Tokioka

EastMeetEast, an online dating service connecting Asians looking to date within their cultural background in the U.S., has just released its first iPhone app. The app, like the website (http://www.eastmeeteast.com), is a free service where singles can browse and communicate with one another.

CEO and Founder Mariko Tokioka says the core of the EastMeetEast experience is delivering high quality matches among the different sociographic and demographic backgrounds. She says, “We match people using numerous features, including those unique to the Asian American dating scene such as whether you were born in the States, when you immigrated, and what languages you speak. Asians are the fastest growing ethnic group1in the U.S. and more Asians are marrying within their race than ever. We are excited to contribute to a growing community!”

Since launching in New York City in November of 2013, 30-40% of users are coming back every week, showing great chemistry among soulmate-seeking singles.

So for the millions of Asian singles out there, what sets EastMeetEast apart from the other dating sites?

Currently having raised $500K of seed funding from DeNA, a global leader in mobile Internet services, Eureka Ventures, started by founders of one of the biggest online dating service providers in Japan, and other investors, EastMeetEast is poised to quickly grow its presence outside of New York. It plans to expand nationally into Asian-centric cities such as Los Angeles, San Francisco, and beyond.

EastMeetEast is now available on iPhone App at https://itunes.apple.com/us/app/east-meet-east/id890664813 or through http://www.eastmeeteast.com. It’s free to join, browse, and communicate in whichever language users call their own.

About EastMeetEast
EastMeetEast was founded by Mariko Tokioka, a serial entrepreneur, who developed the idea based on her difficulty she has had finding a match who can share the similar background through general online dating sites and her passion for matching Asian singles on unique cultural criteria. Mariko is an Oxford MBA graduate and co-founder of the mobile learning platform Quipper prior to EastMeetEast. Her co-founder, Kenn Ejima is ex-Oracle engineer and the CEO of Infoteria USA, who is also well-known in the Japanese hacker circle.