Registration Now Open for Scale the Strat on March 1, 2015 at Stratosphere Tower in Las Vegas 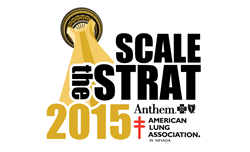 Make no mistake, walking or running all the flights inside this iconic tower is a challenge," said American Lung Association in Nevada Executive Director Allison Newlon Moser. "But we climb for all those who struggle to breathe every day.

The first step is easy. It is the next 1,455 steps that are the challenge. Yes, you read that right. One thousand four hundred fifty-five steps.

Registration is now open for Scale the Strat on Sunday, March 1, 2015. Those wanting to climb all 108 floors of stairs inside the iconic Stratosphere Tower, the highest building west of the Mississippi River, can sign up by going to http://www.ScaleTheStrat.com. Simple, right?

Once registered, participants will join hundreds of athletes of all abilities who dare to take on this extreme stair climb with the goal to raise money for the American Lung Association in Nevada’s mission of preventing lung diseases and promoting lung health.

This year, Scale the Strat will be held in conjunction with the third annual USA Stair Climb Championship, which will attract elite stair climbers from all over the world and allow amateur climbers the opportunity to rub elbows with the best athletes in the sport.

“Make no mistake, walking or running all the flights inside this iconic tower is a challenge. But we climb for all those who struggle to breathe every day,” said American Lung Association in Nevada Executive Director Allison Newlon Moser. “It has been exciting to see Scale the Strat grow and become a signature event in Las Vegas and in the world of elite stair climbing.”

Seven years ago, 110 people took on the challenge. In 2014, close to 600 people climbed the stairs inside Stratosphere Tower raising an impressive $202,960 for the American Lung Association in Nevada in one day. Anthem Blue Cross and Blue Shield has been the presenting sponsor since the event’s inception.

Climbers who register for Scale the Strat 2015 before December 31, 2014 will receive a special “early bird” discounted registration rate of $40. Starting January 1, 2015 registration is $60, and day of event registration is $75. In addition to the registration fee, all climbers are asked to make a minimum fundraising pledge of $150. Online support and personal fundraising coaching is available online.

Participants will be placed into a starting gate queue in groups, then released one-by-one at timed intervals. Each athlete will be able to climb the Tower once.

Registration and additional information about Stratosphere Casino, Hotel & Tower can be found at http://www.ScaletheStrat.com.

About American Lung Association in Nevada: ALAN has been improving the lives of Nevadans since 1916 when it was founded as the Nevada Tuberculosis Association to combat the devastating disease of tuberculosis (TB). Since that time, ALAN has remained constant in the fight against lung diseases and the promotion of lung health. Lung disease is the fourth leading cause of death in America and ALAN is often the first point of contact for individuals with lung disease. ALAN provides practical help and education to people living with asthma, emphysema, and other lung diseases, confronting this disease at the root level by educating kids about the dangers of smoking, providing smoking cessation programs, advocating for smoke-free environments, and working to reduce air pollution.

About Anthem Blue Cross Blue Shield: Serving Nevada since 1969, Anthem is the state’s second-biggest health benefits provider and the only one licensed to sell insurance in every county. As Nevadans, we live and work in the same communities we serve and have made it our business to help provide health security through a broad portfolio of health care plans and insurance products. Anthem has been a proud sponsor of the Scale the Strat since the event began. Our parent company recently partnered with the American Lung Association nationwide with a $1.5 million grant to support smokers in their efforts to quit for good through the ALA’s “Quitter in You” smoking cessation program that will roll out in Nevada and 14 other markets.