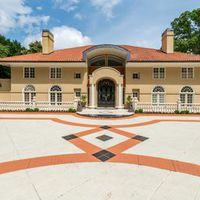 The Gambler is asking $4.8 million for his Atlanta mansion

Kenny Rogers' Atlanta mansion with 22 rooms is for sale and featured this week on the Top 10 Homes Spotlight at TopTenRealEstateDeals.com.

From his years as a jazz bassist with the Bobby Doyle Trio and folk harmony singer with the New Christy Minstrels until his Lionel Richie-written single “Lady” topped three different charts in one week in the 1980s, Kenny Rogers was just starting to build his first head of steam. From there, he has gone on to sell more than 85 million records. Eleven of his albums are platinum, just about all the rest went gold, and he racked up three Grammys, eleven People’s Choice Awards and eight Academy of Country Music Awards. In interviews, he has claimed his extraordinary commercial success comes from picking good songs, and that as long as you don’t play them like a polka, they’re bound for success. Rogers is one of the few country-ballad, soft-rock singers who has the rare quality of universal appeal, able to play to women, their boyfriends and husbands, the memories of grandparents and even tweens feeling the first surges of romance. Still touring at the age of 75 with at least four shows a month, Rogers will be packing the house all over the United States, Canada, Australia and New Zealand through next year. During his rapid paced musical career of 50 years, he has acted, authored books, produced records, is noted as a fine photographer, been a restaurateur and recently put out yet another new album, “You Can't Make Old Friends.”

Displaying further his talent and magic touch “Through the Years” to create universal appeal, Rogers has now put his two-year redo and design project estate in North Buckhead, Atlanta on the market. Kenny has bought, restored and sold several of his Georgia homes where he lives with his wife, Wanda, and their twin 10-year-old sons. Proving that he is just as talented in choosing blockbuster real estate as he is in picking hit songs, this property has everything one could want for entertaining and family livability. Quite grand but at the same time warmly inviting, the 11,964-square-foot home is sited on 1.26 gated, private acres in a sought after neighborhood of Atlanta.

The interior has a total of 22 rooms including six bedrooms, twelve baths, Palladian windows, an elevator, 10 fireplaces, a home theater and a Roman spa. Rich woods, marble, stone, coffered ceilings, crown moldings and luxurious fireplace surrounds are found throughout. Equally as palatial as the interior, the grounds include fountains, a sports court, and a pool with spa, swim-up bar and separate cabana.

Kenny Rogers, who always seems to win in real estate, has just put another of his signature Georgia estates on the market, this one in north Atlanta, priced at $4.8 million. The listing agent is Stephanie Lewis of Atlanta Fine Homes, Sotheby’s International Realty.