Rigaku Corporation has concluded a successful 3rd European SmartLab Workshop in Karlsruhe, Germany. Held at the Karlsruhe Institute of Technology (KIT), the event brought together international materials scientists from both industry and academia to present and discuss state-of-the-art research findings and methods. 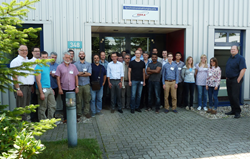 Participants of the 3rd European Rigaku SmartLab Workshop at KIT/Anka in Karlsruhe, Germany

The tradition of this workshop has to be continued! The scientific level of the presentations is amazing.

Rigaku Corporation is pleased to announce the successful completion of the 3rd European SmartLab Workshop in Karlsruhe, Germany.

The workshop was held on the 14th and 15th of July on the Karlsruhe Institute of Technology (KIT) North Campus, and focused on application and operation of the Rigaku SmartLab Intelligent X-ray diffraction system.

Dedicated to actual and potential users of the instrument, the event was designed to further strengthen and unite the community of SmartLab® users and X-ray diffractionists in Europe. State-of-the-art research findings and methods were presented and discussed by invited speakers elected among SmartLab users. Over 20 participants from the UK, Italy, Switzerland, Romania, Czech Republic and Germany contributed to the event. X-ray diffraction solutions related to a variety of applications, including silicon microelectronics research and thin films, were discussed.

Upon its conclusion, the workshop, having brought together international materials scientists from both industry and academia, was praised for being “a great environment for networking and thinking outside the box.” Dr. Peter Zaumseil, IHP Frankfurt, Germany hailed the event by saying, “The tradition of this workshop has to be continued! The scientific level of the presentations is amazing.”

Rigaku recently introduced the SmartLab 3 system, the latest member of the SmartLab product family, which is the Rigaku platform for all XRD applications from powder diffraction to thin film applications and was the recipient of the coveted R&D 100 Award in 2006. The SmartLab 3 system offers continued refinement of the ease-of-use features of the entire SmartLab product family: automatic alignment, component recognition, cross beam optics and a five axis goniometer.

About the KIT & ANKA
ANKA is the Synchrotron Radiation Facility at the Karlsruhe Institute of Technology (KIT).

With the opening of ANKA in March 2003, Karlsruhe joined the exclusive club of some 50 cities worldwide that maintain and develop their own synchrotron light sources for the benefit of an international user community. As a large scale facility of the Helmholtz Association of National Research Centers, ANKA is part of the national and European infrastructure offered to scientific and commercial users for performing excellent science and relevant technological development. ANKA provides a unique combination of beamlines and labs for specific science fields.

About Rigaku
Since its inception in Japan in 1951, Rigaku has been at the forefront of analytical and industrial instrumentation technology. Rigaku and its subsidiaries form a global group focused on life sciences and general purpose analytical instrumentation. With hundreds of major innovations to its credit, Rigaku and its subsidiary companies are world leaders in the fields of small molecule and protein crystallography, X-ray spectrometry and diffraction, X-ray optics, as well as semiconductor metrology. Rigaku employs over 1,100 people in the manufacture and support of its analytical equipment. Its products are in use in more than 70 countries – supporting research, development, and quality assurance activities. Throughout the world, Rigaku continuously promotes partnerships, dialog, and innovation within the global scientific and industrial community.