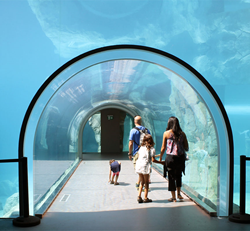 Visitors can observe the earth’s largest bear species while safely inside an R-Cast® aquarium tunnel that is over 35 feet long, 8 feet tall, and 10 feet wide.

There are few places on earth where a human, dressed in shorts and sandals, can observe polar bears and seals as they swim together under icy water. The Journey to Churchill exhibit in Winnipeg, Canada, is one such place. The creation of this naturalistic province required a substantial investment of nearly $90 million and five years of construction. However, the public response is already overwhelmingly positive. Approximately 102,000 people have visited the facility in the month since its opening.

Aquarium builder Reynolds Polymer Technology manufactured 13 custom acrylic panels for the Gateway to the Arctic building at Journey to Churchill. The Sea Ice Passage, a unique underwater area within the Gateway that is home to both polar bears and seals, features two underwater viewing tunnels. In total, approximately 50 tons of R-Cast® was installed in the new facility.

The polar bear exhibit is home to a family of four: Aurora, Kaska, Hudson, and Storm. Visitors can observe the earth’s largest bear species while safely inside an R-Cast® aquarium tunnel that is over 35 feet long, 8 feet tall, and 10 feet wide. This structure is especially unique in that it has a 21-foot wide, 13-foot tall transparent face that allows for exterior views of the tunnel as well. Six-inch deep, transparent walls are used to separate man and bear, though the clarity of R-Cast® greatly reduces the perceived thickness. There are several other acrylic zoo exhibits in place for bear-watching, including a 9,354 pound flat panel that is an ample 33 feet wide.

The second tunnel at Journey to Churchill is slightly smaller in length at 19 feet. However, this tunnel lets visitors observe not only bears but ringed seals as well. A nearly invisible divider gives the appearance that both animal groups share the water in harmony. The seal exhibit’s main observation window is 16 feet wide and allows for 11 vertical feet of viewing. A series of concave demi-tunnels provide further insight into the seal exhibit.

Three of the bears at Churchill- Aurora, Kaska, and Storm, were orphaned and may have been euthanized had they not found a home at Assiniboine. In addition to the Sea Ice Passage animals, Journey to Churchill preserves five wolves, three muskoxen, four arctic foxes, four snowy owls, and three caribou. Each species was chosen because of its prominence in the natural arctic world. To educate visitors about the park and its inhabitants, $6.5 million was invested in signage and displays.

“Journey to Churchill is a comprehensive, explanatory exhibit that is unlike anything else in Canada,” said Matt Houlihan, Executive Vice President for RPT. “This park represents a new breed of design that seeks to combine enlightenment and animal welfare in addition to magnificent scenery.“