FNC Index: Home Prices up 2.3% in the Second Quarter 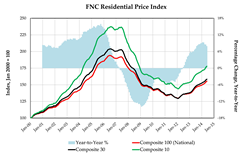 Encouraging job growth and favorable mortgage rates have contributed to a rising demand for housing.

Despite continued signs of moderation in home price appreciation, the latest FNC Residential Price Index™ (RPI) shows that U.S. home prices were up another 0.8% from May to June and 2.3% throughout the second quarter. Constructed to gauge the price movement among normal home sales by excluding distressed properties, the index’s year-over-year growth continues to decelerate as widely expected: down to 8.0% from its fastest acceleration of 9.4% in February 2014.

Encouraging job growth and favorable mortgage rates have contributed to a rising demand for housing. July home prices are expected to continue to trend upward. As mortgage defaults and foreclosure starts continue to fall to record lows, foreclosure sales as of July have dropped to 10.5% of total existing home sales—the lowest rate since October 2007. Conditions in the for-sale markets continue to be favorable: July’s asking price discount averages only about 2.0% and median time-on-market, 90 days.

Based on recorded sales of non-distressed properties (existing and new homes) in the 100 largest metropolitan areas, the FNC national composite index shows that June home prices rose at a seasonally unadjusted rate of 0.8% following a strong uptick in May. The two narrower indices (30- and 10-MSA composites) show similar rises in the nation’s top housing markets, up 0.8% and 0.9% respectively. On a quarterly basis, the indices increased faster during the second quarter than the first. On a year-over-year basis, the indices continue to exhibit moderate growth.

Sacramento, New York, and Charlotte show the largest price gains during the month at 1.9%, 1.7%, and 1.7% respectively. This is the second consecutive month that Sacramento and Charlotte are seeing a sizeable month-to-month price increase. Prices were up from May to June in most markets, although a few MSAs -- including Washington D.C., Phoenix, St. Antonio, and St. Louis -- showed a negative month-to-month change. The quarterly trends likewise vary mostly from flat to moderate, led by Sacramento, Charlotte, Riverside-CA, and Miami where home prices are up more than 5.0% during the second quarter.

On a year-over-year basis, nearly a dozen cities, led again by Sacramento, Riverside, and Miami, continue to show double-digit price gains amid a notable slowdown in the annual rate of price appreciation across much of the country. The Cincinnati, St. Louis, and Cleveland markets largely remain an outlier and their latest numbers (from June) continue to point to weakening prices year over year.