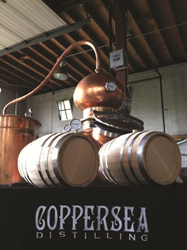 Coppersea Distilling, the Heritage-Methods craft distillery in West Park, New York, announces that it has filled the first whisky barrels made from New York State-grown white oak and built by a New York cooperage, U.S. Barrel Company, since Prohibition. These two inaugural barrels were filled with bourbon and rye whisky. The bourbon is the first to be matured in New York State oak since the U.S. recognized that spirit as a “distinctive product of the United States” in 1964.

“From the outset, Coppersea has gone to great lengths to source all of the ingredients in our whiskies from New York State,” remarks Coppersea master distiller Angus MacDonald. “There is a tendency to place the barrel outside of those considerations, but when you reflect on how much of the flavor of an oak-matured whisky comes from the wood it is aged in, it becomes clear that a truly local whisky must be aged in locally sourced oak.”

U.S. Barrel Company owner and head cooper Bob Hockert states, “We feel that making a high-quality whisky barrel is just as much a craft as making the whisky that goes into it. Our team has been creating slack barrels [which are not designed to hold fluids] for ten years, so we began this project with a good amount of expertise. Tight-barrel cooperage has its own challenges, though. We’ve had to build our own equipment, develop an understanding of whisky distilling, and forge relationships with New York State loggers in order to build barrels that meet the highest standards.”

“At Coppersea, we believe that traditional methods make superior whisky,” added Coppersea distillery manager Christopher Williams, “and the team at U.S. Barrel Company believes traditional methods make a superior barrel. For example, they source premium New York oak, and then air-season for at least a year. Many large cooperages kiln-dry their wood, but U.S. Barrel Company understands that air-seasoned oak takes on ambient flora and microbes which lend additional depth, complexity and terroir to the whiskies during barrel-aging.”