The Business Doctors added Michael DeGutis, as a strategic partner, on July 1st, 2014. Michael is a vital resource to the brand, and has already contributed to the team’s success at the PILMMA Tradeshow. 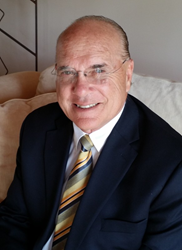 I learned from my own successful business experience the concept of believing the customer is king. This concept can drive any company to profitability. I believe having great customer service, and a great team can pave a road to success.

Michael began his tenure by leading the sales effort of The Business Doctors’ product named Creating a Service Culture. He adds knowledge and years of experience to the dynamic duo.

Michael’s multifaceted background has molded him into a successful sales person, media personality, producer and now a Business Doctor.

Michael began his career in the media industry. He started in the media space as a radio personality and sports announcer for WCEN-AM FM radio, WCMU TV, and the Michigan Sports Network. Michael was an on-air talent and hosted his own television show for nearly 10 years. He also had two ongoing 30 minute television shows, Sports Rap with Mike DeGutis and CMU Sports Highlights with Mike DeGutis, which broadcasted to a large part of the state of Michigan.

Michael then transitioned into the business of producing radio and television commercials. In this new space he began working on international films and videos. He worked with many celebrity personalities and traveled across the nation.

Michael has been to 49 of the 50 states, and visited over 20 countries plying his trade as a film producer. During his years of travel he was exposed to the field of sales.

The years of travel prompted Michael to begin his career in sales. Michael states, “A producer’s talent is the same as that of an accomplished salesperson, selling investors, scripts, convincing people to be in his films. There are many of the same skills being used.”

Michael started his sales career as a national Sales Manager for Elite Companies Worldwide, an international supplier for the lodging Industry. Following this role, Michael made a vertical career move to Vice President of Sales at Courtesy Products, a subsidiary of Enterprise Rent-a-car. Lastly, before joining The Business Doctor team, Michael was a national Sales Vice President at Fiber-Shield Industries, Inc., an international chemical manufacturer.

Michael said, “We make a great team, Sheila has a great history of perseverance, hard work and successful experience in all facets of a company from operations through marketing and combined with my media experience and sales expertise we can bring a number of assets to companies that need help.”

Michael is excited about the new products that The Business Doctors have incorporated in to their business model, that involve Customer Service emphasis.

“I learned from my own successful business experience the concept of believing the customer is king. This concept can drive any company to profitability. I believe having great customer service, and a great team can pave a road to success.”

About the Business Doctors:

Sheila Skolnick and Michael DeGutis, The Business Doctors of Long, Island, New York, are a dynamic team with wide-ranging business experience. Sheila is an inspirational speaker and business consultant that created a multi-million dollar business without any knowledge of the industry. Sheila teaches business principles and offers hands on experiences when speaking about her business success. Sheila currently holds workshops for businesses and aspiring entrepreneurs. Michael brings his extensive media experience, successful sales techniques and years of working experience to The Business Doctors’ team. Michael started his own business by producing commercials, ads and film for celebrity and professional athletes. Michael’s career later transitioned into a successful sales career with a number of reputable companies.