RENU 28 recently launched in Australia and New Zealand, reports Trish Schwenkler with OurGlobalHomeBusiness.com—and the response has been exceptional. 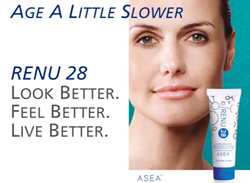 Just a short week after RENU 28 launched in Australia and New Zealand, users of the product are already raving about its benefits and ordering it en masse.

On Wednesday of last week RENU 28, the world's first and only skin gel to use Redox Signaling molecules, became available for purchase in Australia and New Zealand, and the response has been overwhelming.

"The way that RENU 28 works is, if you think about the definition of aging, it's really the slowing down of the rate of cellular renewal within your body. If you think about the definition of anti-aging, it's the increasing of that rate of cellular renewal. What RENU 28 does is it works with these tiny little guys called Redox Signaling Molecules, the cell-to-cell communicators... and when you have good communication at a cellular level, you have great, beautiful, healthy functioning skin," says Ingrid Seaburn, international skin care expert and Australian native.

Ingrid was joined by Sally Obermeder, Australian media personality and co-host of Australia’s Channel 7 afternoon news, to usher in this new and exciting skin care gel.

"This is what the skin does naturally; all I'm doing is helping it along," says Sally. "And if I can try and minimize the chemicals that I'm putting in my skin or on my skin, then why wouldn't I?"

Just a short week after RENU 28 launched in Australia and New Zealand, users of the product are already raving about its benefits and ordering more of it en masse.

"[My skin is] brighter, it's tighter, and it's got more clarity to it," says Kate Barget, who recently tried out RENU 28 for herself.

"I never thought I would believe in a product enough to use it, because I don't typically use skin creams or skin lotions. but it's amazing! After using it and trying another product, I actually want more of it," says Sonia Jabbor, another impressed RENU 28 customer.

Learn more about RENU 28 in Australia and New Zealand
by clicking here to watch brief videos.

Trish of Our Global Home Business is an Independent Associate of ASEA, LLC.

ASEA, LLC is the world's one and only manufacturer of Redox Signaling molecule products and is located in Salt Lake City, UT.