The full 2014 NFL schedule, as well as printable schedules for all 32 teams, now available at PrintableBrackets.net. 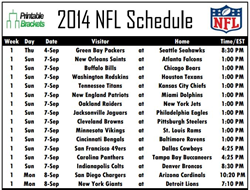 The National Football League is entering the final week of preseason play and the start of the regular season is just days away. The 2014 NFL schedule opens up with the defending Super Bowl champion Seattle Seahawks hosting Aaron Rodgers and the Green Bay Packers on Thursday, September 4th.

Now, fans can follow all the action with the complete 2014 NFL schedule from PrintableBrackets.net.

“After a news-filled offseason, it’s just about time to start settling things on the field,” said Printable Brackets spokesperson Zaniel Worth. “If the offseason and preseason is any indication, it promises to be a very interesting regular season.”

The Packers-Seahawks affair is just one of many notable matchups in Week One. In early action on Sunday, September 7th, Johnny Manziel and the Cleveland Browns will travel to Pittsburgh to square off with the Steelers. Late on Sunday, Tony Romo and the Dallas Cowboys will welcome the San Francisco 49ers. The day’s action wraps up with Peyton Manning and the Denver Broncos hosting Andrew Luck and the Indianapolis Colts on ‘Sunday Night Football’.

Week One of the 2014 NFL schedule features a Monday night doubleheader. First, Eli Manning and the New York Giants will be on the road to face the Detroit Lions. In the nightcap, the San Diego Chargers will clash with the Arizona Cardinals in the desert.

For the complete 2014 NFL schedule, printable schedules for all 32 NFL teams, or dozens of other sports brackets and sheets, please visit PrintableBrackets.net today.