In his new role, Philip plans to use his position on the Board to advance MSA awareness, educate health professionals and collaborate with other charities to make government funding available to MSA patients. Philip is already well known in the MSA community for his tireless campaign with Tim’s MSA Shoe, an iconic symbol of Multiple System Atrophy. 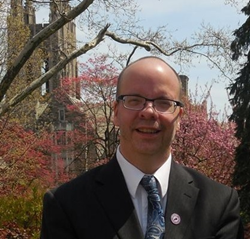 So many people with multiple system atrophy are facing the challenges of just simply functioning from day to day, the needs are overwhelming.

The Multiple System Atrophy Coalition, a growing nonprofit 501(c) 3 organization dedicated to serving patients, caregivers and families affected by Multiple System Atrophy (MSA), announced the appointment of Philip M. Fortier of Detroit, MI to its Board of Directors. MSA is a rare degenerative neurological disease of the brain and spinal cord, and is often classified as one of the “Parkinson’s-Plus” conditions. In addition to resembling Parkinson’s disease (MSA Type P), MSA has additional symptoms involving impairment of the cerebellum (MSA Type C) and/or the autonomic nervous system.

For the past 3 years, Philip has directed the Defeat MSA: Joseph G. Fortier Foundation, a non-profit public charity he founded in honor of his late brother. The youngest of six brothers, Philip was a former caregiver for Joe, who suffered with Multiple System Atrophy for three years until he passed away in early 2013. Prior to the onset of his illness, Joe worked in the sleep disorders field for more than 25 years. During that time he established and managed sleep study clinics and worked in sleep research. Joe was passionate about supporting medical research and doing his part to help improve the health of others.

Philip holds a graduate degree in Philosophy and Comparative Religion and teaches at the University of Detroit Mercy, a Catholic university in the Jesuit and Mercy traditions. Both Philip and his late brother Joe spent their formative years in Jesuit schools. "An important part of the Jesuit philosophy emphasizes a call to serve others and to work for justice", explains Philip. "My brother Joe lived this mission throughout his life and this has inspired me to help in the efforts to defeat MSA”. “I'm very passionate about getting more and better treatments right now for those with MSA”, he continues. “So many people are facing the challenges of just simply functioning from day to day, the needs are overwhelming".

Philip coordinates the global journey of Tim's MSA Shoe, an iconic traveling shoe on a symbolic marathon to raise Multiple System Atrophy awareness among the general public. Having this comical symbol for MSA has meant a lot to those fortunate enough to host Tim’s Shoe in their community. It has offered some degree of levity to families facing an otherwise heartbreaking disease. For those with MSA, laughter really is the best medicine or at least, it can help in light of the challenges MSA patients face everyday.

Philip has also worked to expand access to drugs that help MSA patients. "Philip came to DC and testified before the FDA subcommittee that eventually recommended approval of Northera, a newly approved drug for neurogenic orthostatic hypotension", says Don Crouse, Vice President of the MSA Coalition. “His advocacy work was vital to ensuring the successful approval of this badly needed drug. Philip will be a terrific asset to our team and assist us in aligning the MSA charities - all of us directed toward the one goal of defeating MSA".

Implementing educational programs for health professionals, developing a national medical equipment network, and collaborating with other charities to make government responsive to MSA patients are a few of Philip’s goals.