Supporters of the Fully Informed Jury Associatioin will educate communities across the country on Jury Rights Day about jurors' right to consult their consciences and conscientiously acquit defendants when necessary for a just verdict, even if it requires setting aside the law to do so. 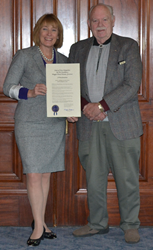 When law and justice come into conflict, justice must prevail. The Fully Informed Jury Association teaches that jurors are empowered to uphold justice in such cases, by setting aside the law and voting Not Guilty when a just verdict requires it.

Jurors’ rights educators around the country, in conjunction with the Fully Informed Jury Association (FIJA), will celebrate Jury Rights Day on September 5 by educating their communities about jury nullification. Founded in 1991, Jury Rights Day is FIJA’s signature celebration, annually commemorating the conscientious acquittal of William Penn in 1670 that firmly grounded in common law jurors’ right to vote Not Guilty when a just verdict requires it, even if the law has technically been broken.

This year marks the 344th anniversary of the day when jurors refused to convict William Penn of breaking England’s Conventicle Act, despite clear evidence that he was in violation by publicly preaching a Quaker sermon. In refusing to convict Penn, the jurors refused to enforce what they knew to be unjust law, even when directed by the judge to return a Guilty verdict, and even when imprisoned for their act of conscience. Refusal to deliver a Guilty verdict when jurors are aware that the law has technically been broken is known as jury nullification.

“Today jurors still have the right and the responsibility to deliver general verdicts according to their consciences, and they cannot be punished for their verdicts,” said FIJA Executive Director Kirsten Tynan. “Law exists for the purpose of safeguarding justice. Justice is not to be violated or repudiated in the interest of technically upholding an unjust law. When law and justice come into conflict, justice must prevail. The Fully Informed Jury Association teaches that jurors are empowered to uphold justice in such cases, by setting aside the law and voting Not Guilty when a just verdict requires it,” said Tynan.

Jurors who were punished for their verdict in Penn’s case appealed to a higher court for relief. Chief Justice John Vaughan ruled in their favor and reversed their penalties, firmly establishing in English common law, not only jurors’ right to conscientiously acquit, but also providing a firm foundation for freedoms of religion, speech, and assembly. The founders of the United States purposely protected all of these rights when establishing the American legal system.

FIJA hosted the very first Jury Rights Day on September 5, 1991, rallying activists around the country to spend an hour handing out jury nullification literature in their local communities. The tradition continues this year with individuals and organizations hosting events across the country handing out educational materials everywhere from courthouses to county fairs, speaking to local groups, holding press conferences, etc.

On this day of celebration and commemoration, juror educators hope to create many fully informed jurors who understand and are prepared to act on the knowledge that:

About the Fully Informed Jury Association
FIJA is a non-profit, educational association dedicated to informing the general public about their full rights, powers, and responsibilities in delivering just verdicts as trial jurors. The organization publishes and distributes educational literature, which anyone can receive by calling 1-800-TEL-JURY, and maintains a web site at FIJA.org to inform the general public of their Constitutional authority to protect human rights by refusing to enforce bad laws. FIJA encourages all jurors to consult their consciences when deliberating over a case, and to refuse to enforce any law that violates the human rights of the defendant.