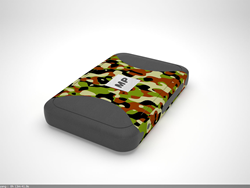 MPortable, the world’s first wireless solid state disk (SSD) with a revolutionary design for traveling photographers, has launched a crowd-funding campaign on IndieGogo. MAJC IT, a Zhu Hai-based startup, has produced a prototype of the MPortable and is using IndieGogo to raise funds for production and distribution. The MPortable is a wireless, high speed, easy-to-use and manage storage device for both amateur and pro photographers.

“This is about more than raising funds,” said QiangMa, CEO of MAJC IT. “For this kind of product where there’s a large, potentially enthusiastic user base of serious photographers, we think that the crowd-funding approach can give us a boost with early adopters.” Ma also noted that early adopters can be a great source of information and feedback about design and features. “We'll gather your suggestions and do a poll of the most popular features,” he said.

Every aspect of the MPortable was thought through with an eye to desirability by photographers who travel: An SSD has no moving parts, so it is more likely to keep the user’s data safe if the device gets dropped or the system is shaken while it's operating. SSDs are much faster than “spinning” hard disks and they use less power. At just 140mm x 80mm x 25mm, the water resistant devices are also lighter and easier to pack in a bag. MPortable’s battery capacity is expected to be approximately 3,200 mAH in the final release version. With write speeds of 200 MB/Second and read speeds of 400 MB/Second, the MPortable easily outperforms virtually all USB flash disk technologies used by photographers.

About MAJC IT
The device was developed by MAJC IT, a startup company based in Zhu Hai, GuangDong, China. The company was co-founded by Mark( Ma Qiang), Aimar, Jack and Charles. The team has rich experience in hardware and software design. Previously, the company released a private cloud server named "MAJC Box" (http://www.majcbox.com).