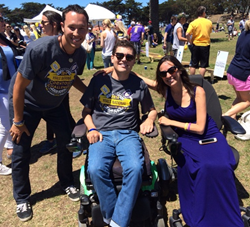 “Who would have thought that a bucket of water and some ice would raise all this awareness and funding toward ALS research! We each, together with our families, and on behalf of the entire ALS community, would like to express our deep gratitude to everyone who has accepted the Ice Bucket Challenge so far and encourage people to stay involved in the ultimate challenge to end ALS. Every time a person accepts the Ice Bucket Challenge and posts it on Facebook, Twitter, Instagram or YouTube, you give us new strength and hope. Every donation is moving the needle on important research leading to the development of effective treatments and a cure for ALS. Thank you!”

To see who YFALS Ambassadors have challenged to accept the Ice Bucket Challenge, visit http://www.als.net/icebucketchallenge.

About ALS
Amyotrophic lateral sclerosis (ALS, Lou Gehrig’s disease) is a progressive neurodegenerative disease that leads to paralysis, due to the death of motor neurons in the spinal cord and brain. There is no known cure for the disease. About 5,000 people in the US are diagnosed with ALS each year; the incidence is similar to multiple sclerosis. However, with no effective treatment, the average patient survives only 2-5 years following diagnosis. While exact figures are unknown, it is estimated that there are about 30,000 people in the US diagnosed with ALS today. The worldwide population of ALS patients is estimated at 450,000.

About ALS Therapy Development Institute (ALS TDI)
The mission of the ALS Therapy Development Institute (ALS TDI) is to discover and develop effective treatments for ALS patients today as soon as possible. ALS TDI is the world’s largest independent ALS/MND drug development-focused nonprofit organization. In addition to more than 30 internal therapeutic aimed programs, the world’s first nonprofit biotech partners with dozens of pharmaceutical and biotechnology companies worldwide in order to advance potential treatments into the clinic. Its lead ALS therapeutic candidate, Novartis’ (Switzerland) Gilenya (TDI-132), is in Phase 2A clinical trial for ALS. For more information on its drug development programs, visit http://www.als.net.

About ALS TDI’s Young Faces of ALS (YFALS)
ALS TDI’s Young Faces of ALS (YFALS) program is driven by several ALS patients diagnosed with the disease before or around the age of 30, along with family members and friends of people living with ALS. The young men and women selected to lead the campaign are called “YFALS Ambassadors,” and together they participate in awareness campaigns via the YFALS Facebook page, YFALS website, and within their communities. Additionally, these ambassadors hope to encourage greater action to support ongoing drug development at ALS TDI, which has the sole mission to discover and develop effective treatments for ALS patients today.