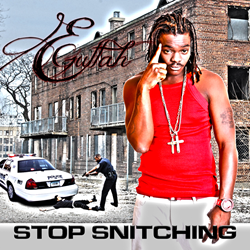 E Guttah, the latest to arrive on the scene from Miami, FL, is a fiercely energetic young rapper with a story to tell about the hood he grew up in. Full of Southern Charm and relatable lyrics, E has the mic presence of a more considered and more lyrical Wacka Flocka mixed with the swag of a young hungry Mystikal.

The “Stop Snitching” mixtape is a product of real life experiences. The project’s cover art symbolizes Guttah’s near encounter with death; being shot three times as a result of snitching. The unfortunate incident gives Guttah the qualifications to speak on the nature and consequences of snitching. For more information on E Guttah, follow him on twitter at: @eguttah_yuno.