Gov. Bobby Jindal filed a lawsuit today in federal court that accuses the Obama administration of violating the Tenth Amendment to the U.S. Constitution by illegally usurping state control over education policy. The following statements from education experts at The Heartland Institute may be used for attribution. 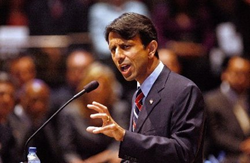 In pushing, funding, and evaluating Common Core and its tests, the federal government has stepped right into nearly every American child's classroom.-- Joy Pullmann, The Heartland Institute

Gov. Bobby Jindal filed a lawsuit Wednesday in federal court that accuses the Obama administration of violating the Tenth Amendment to the U.S. Constitution by illegally usurping state control over education policy. The federal government does this, the suit says, by awarding billions in federal grant money only to states that adopt Common Core education standards.

The suit was filed in the U.S. District Court for the Middle District of Louisiana in Baton Rouge. [View Jindal's court filing at the governor's official government website.]

The following statements from education policy experts at The Heartland Institute – a free-market think tank – may be used for attribution. For more comments, refer to the contact information below. To book a Heartland guest on your program, please contact Director of Communications Jim Lakely at jlakely(at)heartland(dot)org and 312/377-4000, or (cell) 312/731-9364.

“It's about time a governor has stepped up to the plate to bat for his citizens instead of the federal government. It's clear Gov. Jindal is looking at a presidential run in 2016, but it is also clear that his aspirations in that regard have keenly attuned his ears to what voters of all political persuasions are concerned about. And his lawsuit is right on the merits: In pushing, funding, and evaluating Common Core and its tests, the federal government has stepped right into nearly every American child's classroom. This is both illegal and a bad idea, and polls show most Americans agree.”

“Like everything Gov. Jindal has said about Common Core since he began to oppose it, this is going to be viewed as a political ploy being used to win points in the event that he runs for president. But I've spoken to several parents in recent months who believe that Jindal's change of heart regarding Common Core is genuine.

“The reason they believe that, and can accept that as a possibility, is because they have had the same change of heart themselves. Not all parents who are questioning Common Core started out against the standards. As time has gone on, some have come to learn what the standards will mean. They fear teachers being forced to teach students only one way of doing things under the guise of teaching better critical thinking skills – and, of course, not all children learn the same way. They have learned that not all their children's teachers feel ready to teach these standards. They have learned that they can't help their children with their homework because they do not understand it.

“Meanwhile, states are finding how hard it is to get out of Common Core once you sign up. Even states that leave are struggling to come up with replacement standards as quickly as they are required to, and the saga is going to continue in Louisiana. Everyone will continue to sue everyone regarding Common Core, and there is no way to tell whether the state education board and Jindal's hand-picked education superintendent, John White, who continue to support the standards, or Jindal, who has changed his opinion on the matter, will prevail.

"That said, I do not think Jindal will win this lawsuit. Here's why: Jindal is suing the U.S. Department of Education for violating federal law and the 10th Amendment of the Constitution by essentially forcing states into Common Core through the Race to the Top program. The suit alleges that states had to, ‘enter binding agreements to adopt and fully implement a single set of federally defined content standards and to utilize assessment products created by a federally-sponsored “consortia.” ’ But the federal Race to the Top program was voluntary. Forty states were awarded millions of dollars to make voluntary, not compulsory, changes to education policy, including adopting Common Core.

“Only a handful of states opted not to accept that federal money. The argument can be made that states and officials did not know what they were getting themselves into, and I think that is a fair point. I just don't believe the courts will be convinced and compelled enough to care. It doesn't matter how right Jindal may be about Common Core; this lawsuit does not seem to be the best tactic, though it seems to prove the point that he is willing to use any means necessary to win this fight.”