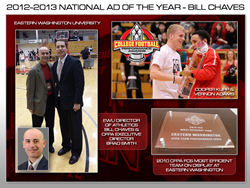 'Thirteen out of fourteen programs have a cume GPA of 3.0 or greater, and the one that doesn't has a 2.9.'

"Thirteen out of fourteen (programs at Eastern Washington) have a cume GPA of 3.0 or greater, and the one that doesn't has a 2.9," said Chaves. "We talk about having our student-athletes come to school, earn their degree, have a great experience while they're here; that's what's most important because we can develop leaders for tomorrow."

The full interview with Eastern Washington Director of Athletics Bill Chaves is available on the CFPA FCS Awards YouTube Channel.

The goal of College Football Performance Awards is to provide the most scientifically rigorous conferments in college football. Recipients are selected exclusively based upon objective scientific rankings of the extent to which individual players increase the overall effectiveness of their teams.

As prominent scholars from a wide variety of disciplines note, CFPA eliminates the politics and biases that vitiate balloting-based awards. Furthermore, CFPA has received praise from both Republican and Democratic White House officials for promoting objectivity and fairness in college football.

CFPA is now in its seventh season of player and team performance recognition. Twenty-eight CFPA winners have been first-round NFL Draft selections.