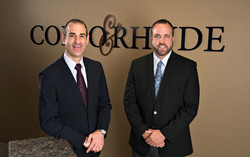 A DUI in Arizona is a serious offense. The charges can severely impact your life in terms of your job and relationships, especially in Arizona.

Labor Day usually means backyard barbecues and pool parties. This year, it could also mean a costly Arizona DUI charge, thanks to an increased police presence and DUI checkpoints throughout Phoenix.

“When you’re celebrating a holiday, you tend to relax your standards and don’t think twice about driving home or to the next party after having a couple of drinks,” Corso said. “That can prove to be a dangerous and costly miscalculation.”

The Arizona DUI lawyers at Corso & Rhude have extensive experience handling cases that involve driving under the influence. Defense attorney Jeffrey Kegler brings an extensive knowledge of scientific research and evaluation to his cases.

Kegler applies this scientific knowledge and expertise to all traffic related and criminal cases to evaluate the breakdown and analysis of blood alcohol testing, speed measurement instruments and drug measurements.

In 2013, law enforcement made 656 DUI arrests from Thursday, August 29 to the early morning hours of Tuesday, September 3.

A police force of more than 2,000 officers and sheriff’s deputies from The Arizona Governor’s Office of Highway Safety led the 2013 Labor Day DUI campaign around the state, inundating roads with officers and DUI checkpoints.

Arizona law enforcement doesn’t take driving under the influence lightly, and is prepared to ensure safety on the roads, Rhude said.

“A DUI in Arizona is a serious offense,” Rhude said. “The charges can severely impact your life in terms of your job and relationships, especially in Arizona where the law requires that any person found guilty of drinking and driving, even if it’s a first offense, serve jail time.

DUI convictions can also include extensive fines of up to $2,500, suspension of driving privileges and the installation of an ignition interlock device – even for first offenders.

The Arizona DUI defense attorneys at the Law Office of Corso & Rhude do everything in their power to protect defendants’ families and advocate for their rights. They have the experience and expertise to deal with DUI charges in Arizona and will fight to get the charges dismissed and preserve their family.

Every DUI defense case in Arizona is different, however, and the outcome is dependent upon the specific facts and circumstances surrounding the DUI charges, which makes having an experienced Arizona DUI defense attorney even more important.

The Law Office of Corso & Rhude has quickly built a reputation for its vigorous defense of clients, using its lawyers’ previous experience with the Maricopa County Attorney’s Office and other prosecutorial agencies to assist its clients with their criminal defense cases.