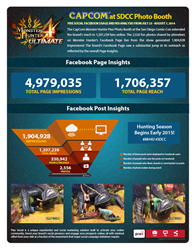 2,556 attendee photos were snapped live on the SDCC floor and shared in real-time to the Monster Hunter Facebook Page. Branded with CapCom’s logo, these photos were viewed by an impressively large network of 1.2 million people generating 1.9 million impressions on Facebook in just two weeks after the event. In addition, the fun photos, capturing colorful cosplay and entertaining scenes from show attendees, were liked, shared, and commented on by 330,942 Facebook fans.

This is the second time CapCom engaged fans and booth visitors through Pixe Social this year. After boosting the brand’s reach to millions of video game and comic book fans at the Electronic Entertainment Expo (E3) in June 2014, CapCom signed on for the social photo booth solution to extend their viral reach at one of the country’s largest comic and pop culture events.

With the close of SDCC, Pixe software has now been leveraged by a number of international events and exhibiting companies in the comic and pop culture industries, including New York Comic Con, London Comic Con, and a number of MCM Comic Con events in the United Kingdom.