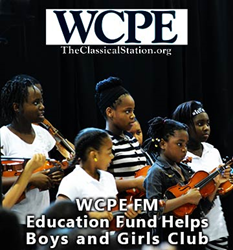 We have seen positive change in behavior, character and sense of community.

Tara Lynn, Chair of the WCPE Education Fund, announces a grant in the amount of $3,000.00 to the Salvation Army Boys and Girls Club of Greensboro for the funding of their music education program. This grant goes toward continuing and expanding their pilot summer music program throughout the academic year with the purchase of keyboards and other instruments. WCPE Radio, http://www.theclassicalstation.org, is a non-profit, listener-supported classical music radio station which advocates for musical enrichment throughout the community through the Education Fund.

“This program has benefited our kids and their communities immensely,” says Keith Miller, PhD, the head of the music program at the Boys and Girls Clubs of Greensboro. “This program has provided the opportunity to learn about classical music. As a result, we have seen positive change in behavior, character and sense of community.”

The WCPE Education Fund exists through the donations of WCPE Radio, 89.7 FM. Members of the station can appropriate 10% of their donation toward the Education Fund which promotes learning and musical experiences in the community. Over the last several years, WCPE has granted over $10,000. The annual deadline to apply for a grant is March 31. This is the first in a series of four grants issued this year by the listener-supported classical music radio station.

About Boys and Girls Club of Greensboro:
The Salvation Army Boys & Girls Club of Greensboro was founded in 1938 to fill a critical need for youth programs in our community. It is owned and operated by The Salvation Army, a Georgia Corporation. Programs in the arts core area enable youth to develop their creativity and cultural awareness through knowledge and appreciation of the visual arts, crafts, performing arts and creative writing. For more information, go to http://www.greensborobgc.org/.

About WCPE:
WCPE broadcasts on a variety of FM frequencies in Eastern North Carolina and is heard throughout Eastern and Central North Carolina and Southern Virginia from its transmitting tower in Wake Forest, NC and other repeater stations. A live feed is also available on the Internet at http://www.theclassicalstation.org , cable systems, affiliate radio stations, and via satellite. WCPE is a non-commercial, listener-supported station that plays classical music exclusively. WCPE is owned and operated by the Educational Information Corporation, a North Carolina non-profit broadcasting organization. The Corporation was formed in 1973 and began operating WCPE in July of 1978. The Corporation holds a federal 501 (C) (3) Public Charity Exemption Certificate and the corresponding certificate from the State of North Carolina.