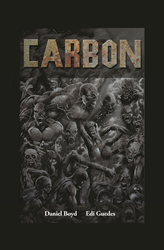 "Boyd marries sci-fi monster flick ideas with Appalachian tragedy, showing us imaginative allegory and authentic profundity do not have to be mutually exclusive.” -- Chris Oxley, Ain’t it Cool News.

Author and filmmaker Daniel Boyd has found himself at the epicenter of a national political battle that is threatening to tear apart his home state of West Virginia. Boyd’s new graphic novel Carbon is receiving its big national rollout this week from publisher Caliber Comics. Hollywood is showing interest in several Caliber titles, including Carbon. Boyd, a West Virginia State University Professor when he’s not making indy films and writing graphic novels, is about to wind up on the wrong side of the fence from a lot of his Mountain State neighbors.

Set in the southern West Virginia coalfields and several years in the making, Carbon tells the timely story of what happens when an evil coal operator lets his greedy disregard for miners safety cause him to awaken and release a cursed and banished underground civilization of monster demons onto the surface. Aware of the symbolism and sticky subject, Boyd says “Look, I know it’s not the most popular thing to say to a lot of people in the coal mining industry right now, but the fact of the matter is that a lot of mine operators have been raping and pillaging our state and taking the majority of the wealth out of here for over a hundred years. Now that the White House has its supposed “War On Coal” happening and the EPA wants to slash pollution from coal fired plants, these coal operators are in serious trouble because suddenly they have to play by the rules. So what do they do? They get a bunch of hard working miners all pissed off at the government, and then they close down the mines and lay off our miners, and cripple our state’s economy instead of even trying to figure out how to make it work. Call me a tree hugger, but I'm sick of the way the industry is trying to push their big, fat lies down our throats. They have been manipulating and disrespecting not only the miners, but also us citizens with these deceptions.

In Boyd’s Carbon epic, the only thing that stands in the way of the end of the world is a tight knit group of courageous coal miners. In fact, Boyd dedicated Carbon to coal miners and says “whatever side of the debate over the industry you fall on, miners are the often the unsung heroes.” Boyd says that he’s 100% “pro-miner,” and that his graphic novels “primary goal is to entertain, but the story also reflects many real and complicated issues that face the coal industry today.” Carbon’s story will continue with the drafted sequel entitled: Salt. Carbon is available online, on Amazon and in comic book stores around the nation.

Zero Gravity Management in LA represents Carbon publisher Caliber Comics intellectual property for development across all multimedia platforms. “This could ultimately result in a Carbon movie or television series, which of course could be great for West Virginia and the people here. Somehow I doubt if the West Virginia Coal Association will be coming aboard as a supporter though, and that’s pretty bad, since their supposedly beloved coal miners are the heroes of our story,” says Boyd. “But they know where their bread is buttered, and I’m sure some coal operators, will have something to say after they get their hands on Carbon.”

“Boyd marries sci-fi monster flick ideas with Appalachian tragedy, showing us imaginative allegory and authentic profundity do not have to be mutually exclusive.” Chris Oxley, Ain’t it Cool News.