Willie B. Faulkner Discusses the Roadblocks to Sierra Leone’s Progress

New book gives an in-depth analysis of one of the world’s most underdeveloped countries. 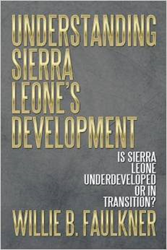 It has been a decade since the Sierra Leone civil war ended, and yet this country is still one of the world’s least developed nations, according to the UN Office of the High Representative for the Least Developed Countries, Landlocked Developing Countries and Small Island Developing States (UN-OHRLLS). As a survivor and victim of the country’s past civil war, author Willie B. Faulkner finds himself troubled by Sierra Leone’s current economic, political, and cultural plight. In his new book, “Understanding Sierra Leone’s Development,” he talks about Sierra Leone’s current situation while raising awareness on the paradigm shift that is necessary in order to move forward.

“Understanding Sierra Leone’s Development” is a realization of Faulkner’s dream. The concept of development is underscored throughout his work, and Faulkner uses Sierra Leone as a case study for identifying the obstacles in the way of progress and, more importantly, the ways to overcome them.

“This book is about the problems that emerging African nations are undergoing,” he says. “Because these problems are identical, my country of birth, Sierra Leone, is used as a case study to identify and address them. It identifies, analyzes, raises implications, and provides solutions to minimize them.”

Willie B. Faulkner is a Sierra Leonean Creole by birth and currently a citizen of the United States of America. He is an alumni of the University of Siera Leone, graduating with a distinction in principles of development economics. He has worked in his home country’s central bank, the Bank of Sierra Leone. Between 1972 and 1988, he rose through the ranks to become section head, reserve management, in the foreign department. During his bank tenure, he participated in seminars abroad. In the early to mid-1980s, he made the difficult decision to emigrate to the United States because of the widespread civil unrest taking place in his homeland.

For more information on self-publishing or marketing with Xlibris, visit Xlibris.com. To receive a free publishing guide, please call (888) 795-4274.