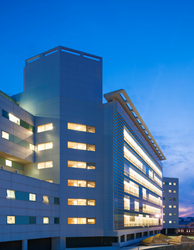 SmithGroupJJR, along with construction manager Gilbane, were awarded the 2014 Bronze Building Team Award from Building Design + Construction and the 2013 Best Project (Health Category) from Engineering News-Record for the planning, design and construction of the University of Virginia Medical Center Patient Tower Expansion in Charlottesville, Virginia.

Building Design + Construction’s Building Team Awards honors commercial building projects that set the standard of excellence in design and construction, while meeting the needs of the owner, the occupant, and the community—all of which could not be accomplished without the successful collaboration of the building team. The Engineering News-Record "Best of the Best" awards program is dedicated to honoring the best construction projects and the companies that designed and built them in the U.S. and Puerto Rico.

The University of Virginia Medical Center 72-bed patient tower expansion focuses on critical care capacity, adding six nursing units, each with 12 private, acuity-adaptable patient rooms. The hospital had maxed out its footprint, so the team devised an inventive solution for the eight-story, 127,000-gross-square-foot addition. At only 34-feet deep, the expansion is essentially laminated onto the front of the hospital, on top of the existing lobby and main entrance but supported by upgrades to the existing structure.

“By centering the entire design and process on healing, we ensured a superior and innovative environment. The design and construction team considered each decision based on the impact it could have on the patients’ well-being,” said Phil Tobey, FAIA, FACHA, principal-in-charge for the patient tower expansion.

The curtain wall façade is an iconic addition to the hospital, offering an abundance of natural light to the patient rooms with minimal solar gain. The project also involved 62,000 square feet of renovation to create the adjacent nursing units on each of the six patient care floors. Many design elements, such as the variable air volume system, reduce energy consumption and lend to the building’s overall sustainability. The result is a nurturing and healing environment designed to enhance the traditional patient care experience. The project achieved LEED-NC Certification.

“As a firm, SmithGroupJJR’s strengths are that they understand the client and listen well. They examined multiple options for the addition and took the time to get it right,” said Thomas Harkins, Chief Environment of Care at the University of Virginia Medical Center.

The $69 million project was completed in February 2013.

SmithGroupJJR (http://www.smithgroupjjr.com) is ranked as the 10th largest healthcare design firm by the Giants 300, published by Building Design + Construction. With 800 employees in 10 offices, SmithGroupJJR is a leader in sustainable design.