Questions arise about the suppression of the history of the Throne of David of Ethiopia and its divorce from the Church in Ethiopia on the 84th Anniversary of King Haile Selassie I's Coronation which took place in Ethiopia on November 2, 1930 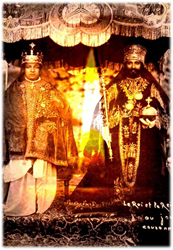 The ancient Throne of Ethiopia was consecrated to the Service of God since the time of KUSH of Genesis 2:13.

From remote antiquity, Ethiopia’s ancient Throne was consecrated to God via the marriage of the Throne to Ethiopia’s ancient theocratic government (the Church today).
This sacred tradition was broken by a socialist Ethiopian military coup led by Mengistu Haile Mariam when The Throne, in an act of sacrilege, was divorced from the Church and the imperial government was replaced with a brutal reign of terror lasting 17 years. Such acts of terror were never witnessed under the reign of King Haile Selassie I.

In 1991, Mengistu was overthrown by rebel leader Meles Zenawi, who also was no supporter of the monarchy. According to numerous Ethiopian newspaper sources, such as ECADF Ethiopian News Agency and The Ethiopian Times, Zenawi’s vision remained clouded with ethnic prejudices for the entire 17 years that he was in office

Wolette Selassie, head researcher at the Queen of Sheba Historical Research Foundation, noted how interviews she conducted with prominent Ethiopians in the US and Ethiopia over the past 20 years, one individual in particular who works for the Library of Congress, all expressed regrets for participating in the movement to overthrow King Selassie, especially after having lived under the regimes of Mengistu and Zenawi.

While various governments around the world take pride in and relish all opportunities to promote and preserve their ancient historical legacies, under constitutional monarchies such as in England, Spain, Sweden, and Belgium, to name a few, Ethiopia has yet to officially recognize the history of her ancient monarchy, the oldest in the world, said Wolette Sealssie

Nathaniel Mayes III, president of the Sacrament California office of the Queen of Sheba said that based on his investigative research, ethnic prejudice and politics appear to be the main reasons why the Throne and members of the Solomonic Dynasty have been expatriated for past thirty-nine years.

Today, on the eve of 84th Anniversary of the Coronation of King Haile Selassie I, who was the last of the Solomonic Kings to sit upon the Throne of David in Ethiopia in modern times (1930-1974), the Queen of Sheba encourages the Ethiopian government and the Ethiopian Tewahedo Church in Ethiopia to correct the errors of the past and bring the Throne of David home to Ethiopia, where it belongs.

The Ethiopian government is expressly encouraged to continue to separate history from politics so that the Church can remarry the Throne according to the ancient tradition. In this way, the Throne can serve the people of Ethiopian as a non-political humanitarian organization solely dedicated to education and historical preservation.

About the Queen of Sheba: The Queen of Sheba d/b/a as ROOTS International Arts Alliance, Inc., is a 27 year old non-profit, non-political organization incorporated in the United States for the promotion and preservation of ancient Ethiopian history via education and the performing and media arts. The Queen of Sheba expressly advocates for the restoration of The Throne of David be remarried to remarry the in Church on Ethiopian soil, according to the ancient tradition.

King Haile Selassie-Time Magazine Man of the Year in 1936

KUSH AND THE SOLOMONIC DYNASTY