Climate Change, Drones, Global Governance, and Much More. Read All About It in the New Fall Issue of Carnegie Council's Journal, "Ethics & International Affairs"

This issue of the acclaimed journal "Ethics & International Affairs" features an essay on identifying the perpetrators of atrocity crimes; a centennial roundtable on climate change; a feature article on the risk and force of drones; a review essay on global governance; and book reviews. 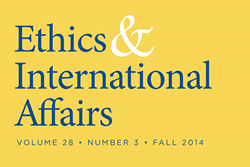 So far we have failed to act on the scale or with the urgency required to avert the unfolding disaster of climate change. Why are we failing? What keeps us from caring for the atmosphere as a shared, finite, and fragile envelope for life?

To access the entire issue online, go to http://www.ethicsandinternationalaffairs.org/2014/fall-2014-issue-28-3/

ESSAYS [Free for a Limited Time!]

Who Are Atrocity’s "Real" Perpetrators, Who Its "True" Victims and Beneficiaries?
Mark Osiel
Modern law's response to mass atrocities vacillates equivocally in how it understands the dramatis personae to these expansive tragedies, at once extraordinary and ubiquitous. Is there any principled order to this? If not, should we care?

ROUNDTABLE: THE FACTS, FICTIONS, AND FUTURE OF CLIMATE CHANGE [Free for a Limited Time!]

The Dawning of an Earth Ethic
Scott Russell Sanders
So far we have failed to act on the scale or with the urgency required to avert the unfolding disaster of climate change. Why are we failing? What keeps us from caring for the atmosphere as a shared, finite, and fragile envelope for life?

Ethical Enhancement in an Age of Climate Change
Paul Wapner
The world is dashing toward greater and more devastating climate intensification. Nonetheless, opportunities for moral action abound. Embracing these opportunities may well come to define what it means to be fully human in an age of climate change.

Moral Collapse in a Warming World
Clive Hamilton
When it comes to climate change, moral corruption prevails not because the situation is inherently murky, but because confusion has been deliberately sown.

Three Questions on Climate Change
Clare Palmer
Climate change will have highly significant and largely negative effects on human societies into the foreseeable future, effects that are already generating ethical and policy dilemmas of unprecedented scope, scale, and complexity.

The Changing Ethics of Climate Change
Daniel Mittler
Traditional framings of climate change action being about future generations or simply another dimension of the North-South divide in global geopolitics are not irrelevant today, but they are no longer sufficient.

Drones, Risk, and Perpetual Force
Christian Enemark
In our headlong embrace of drone technology, we are forgetting to ask two basic questions: What is a drone? And what does it mean that the once obvious boundary separating human and machine intelligence is being diminished?

The Confidence Trap: A History of Democracy in Crisis from World War I to the Present by David Runciman
Review by Trygve Throntveit
This book provides a clear and plausible articulation of democracy's central dilemma, paired with a far less definite treatment of its implications for the conduct of public affairs, either in the past or today.

The Vulnerable in International Society by Ian Clark
Review by Kalevi Holsti
As Clark shows, order is much more than balancing, deterrence, diplomacy, peace, and war. How international society manages global problems should be of major concern to all of us.

Just Freedom: A Moral Compass for a Complex World by Philip Pettit
Review by James Bohman
An innovative and resonant work, this book explores new ground in Pettit's ongoing attempt to articulate the importance of republicanism in the modern age.

Founded by Andrew Carnegie in 1914 and based in New York City, Carnegie Council for Ethics in International Affairs is an educational, nonprofit, nonpartisan organization that produces lectures, publications, and multimedia materials on the ethical challenges of living in a globalized world. For more information, go to http://www.carnegiecouncil.org