"The 3 Steps to Fighting Everyday Racism" Released by Hollywood 27 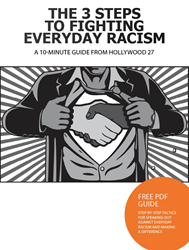 Be a superhero in the fight against racism

The tide starts to turn when people no longer sit back and let racist words and actions go without speaking out and taking action themselves.

Days before the official launch of their “End Racism Blog - The Double Truth”, Hollywood 27 Productions releases the first of multiple guides on combating racism: “The 3 Steps to Fighting Everyday Racism.” The guide helps individuals focus on making a difference in their own lives, empowering more people to speak out and act against racism.

“What I'm doing right now is the culmination of one and a half decades of work and preparation. This first 10-minute guide is the launch point for our final phase.” says writer/director Eric Battersby. “When I opened the doors at Hollywood 27 sixteen years ago, the long term goal was always to put forth every effort possible to fight racism... and to one day end racism altogether.”

Two primary goals of the new guide are to “un-complicate” racism, and to help people overcome the sense of powerlessness they tend to feel when tackling the issue. “The tide starts to turn when people no longer sit back and let racist words and actions go without speaking out and taking action themselves. Racism doesn't end until the only real race on Earth, the human race, actively works to end it together,” Battersby says.

The guide also provides four core philosophical principles for anyone to use when discussing racism with someone else. Eric elaborates, “The biggest obstacle in the battle against racism is a lack of perspective in racists. They think they know the truth, because that's where their perspective and experience has led them. But when you help alter that skewed perspective, anything can happen.”
The 3 Steps to Fighting Everyday Racism guide is now available for free download at Hollywood27.com.

About Hollywood 27 Productions: Formed in 1998, Hollywood 27 Productions is an independent film company focused on ending racism. With their feature film PYRITE (complete with free supplemental materials for hosting viewings and discussing racism), the END RACISM BLOG, and non-profit programs (run via Change The World Films), Hollywood 27 is one of the top sources in the world for learning about, and fighting against, racism. Visit Hollywood27.com for more details.