Tamils to Obama: Please Don't Forget Us When You Talk With Modi, and Include Jayalalithaa and Her Suggested Referendum in Your Discussions

Indian Prime Minister Narendra Modi is paying a state visit to the White House this month; Tamils for Obama urges the president to include Tamil matters in their discussions and to consult the wise and well informed Chief Minister of Tamil Nadu Jayalalithaa. 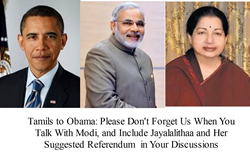 The answer to all of the Tamils' problems is probably an independent and self-protecting Tamil state. If the Tamil-inhabited provinces continue to be ruled by Colombo, all of these problems will continue into the future for as far as we can see

"Indian Prime Minister Narendra Modi is coming to the US to call on you this month," began the letter that Tamils for Obama wrote to the president this week.

"Modi will probably want to talk about regional security, economic matters between India and the US, and international terrorism," the letter went on. "We hope you and PM Modi will find time to discuss matters involving the Tamils in Sri Lanka."

"We named a few of the reasons we think Tamil matters cry out for attention," said the Tamils for Obama press spokesman. "We wrote the president 'Tamils in Sri Lanka are suffering. The armed forces are seizing Tamil properties--homes, farms, lands, and businesses are being taken and transferred to Sinhalese citizens. Cultural objects like Hindu temples are being uprooted and replaced by Buddhist temples. Sexual violence against single and widowed Tamil women by the Sri Lankan armed forces has become rampant. Unexplained disappearances with no legal recourse for families of vanished persons are common. The white vans of paramilitary organizations are a frightening daily phenomenon.

'The Tamil population is scared of the Sinhalese army. This creates an intolerable and unsustainable situation which cannot and will not endure; unrest and disorder are the least of what may be expected.'

"These conditions will lead to bad results," said the spokesman. "If the storm doesn't come soon, it will come later. We are urging the two leaders to take action now."

The letter continued "We hope that you and the Indian Prime Minister will discuss ways to solve these persistent problems. We expect that you and Mr. Modi will include Jayalalithaa in your discussion. She is the Chief Minister of the southernmost Indian state of Tamil Nadu. She is the best informed and most involved Indian leader in Tamil matters, and perhaps the most influential and popular. In the past Jayalalithaa has proposed a referendum among the Tamils in the northeast of Sri Lanka and the displaced Tamils in the Tamil diaspora. This referendum will establish their wish for their political future."

The letter concluded "The answer to all of the Tamils' problems is probably an independent and self-protecting Tamil state. If the Tamil-inhabited provinces continue to be ruled by Colombo, all of these problems will continue into the future for as far as we can see. If an independent Tamil state exists, the Tamils will be able to protect themselves and solve their own problems. Everything rests on separation."