The Qur'an and the Bible: author James Campbell's book helps resolve the conundrum of whose God is God? 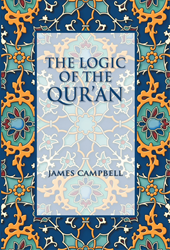 Why would a god present mankind with two different revelations? Are the differences reconcilable and logically explainable?

Current global events beg the question, “Can Islam coexist with the secular, democratic West?” The award-winning and incisive book, "The Logic of the Qur’an", addresses the fundamental questions that will help readers form their own opinion. Why would a god present mankind with two different revelations? Are the differences reconcilable and logically explainable?

The events of September 11, 2001 and other subsequent acts of terrorism have sparked endless debate about terrorism as a form of Islamic jihad, and how this relates to the beliefs and teachings of the Islamic religion. The debate has expanded to include discussions of the Qur’an, the Bible, and Christianity, as well as their relationship to each other and to Western, secular democratic society. In most cases, the debate has focused on sensational matters or taken established positions that have existed as issues between Muslims and Christians for over 1,400 years. The debate has been conducted with little reference to, or quotations from, the Qur’an or the Bible. "The Logic of the Qur’an" examines these questions in a logical framework, rather than debating long-standing dogmatic theological positions. It also uses extensive quotations from the Qur’an and the Bible to present a balanced view.

"The Logic of the Qur’an" was the recent winner of the Spiritual/Religious section of the 2014 San Francisco Book Festival, winning over a runner-up and five honorable mentions.

About the Author
James Campbell has interests in commerce, politics, and religion, and is fascinated with how these foundations of society interact and influence each other.