Students from Portland, OR and Rochester, NY to be Honored at the Children’s Environmental Health Network’s Ninth Annual Child Health Advocate Award Reception 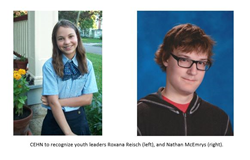 Their initiative represents exactly the kind of informed engagement needed from theirs and future generations to carry environmental stewardship forward and safeguard public and community health.

Nathan McEmrys, from Portland, Oregon, and Roxana Reisch, from Rochester, New York, have been selected to receive the Children’s Environmental Health Network’s 2014 NOW Youth Leadership award. This award was created as part of CEHN’s 20th anniversary celebration in 2012 to honor young people for their exceptional work in environmental health leadership.

Nathan is a junior at Roosevelt High School in Portland, Oregon where he, upon learning that his neighborhood ranked in the top 1% for worst air quality in the nation, joined his school’s After School Air Pollution (ASAP) club. The mission of ASAP is to collect and analyze data on local air pollution levels to bring about positive change in the community. Along with a few of his ASAP club members, and in collaboration with community groups including Portland’s Neighbors for Clean Air, Nathan performed air quality research, specifically testing 12 outdoor locations’ NOx concentrations. Their findings were presented at multiple workshops and garnered four awards at the Portland Public Schools Science Expo. Nathan has also traveled to meet with regulatory agencies as well as state and federal legislators to try to gain support for legislation that would reduce use of toxic substances and generation of hazardous waste. Nathan hopes to continue to work on policy reform to improve air quality, and plans to become a computer hardware engineer.

Roxana is a seventh grade in Rochester, New York, at the World of Inquiry School. At only 12 years old, she has already shown a great commitment to, and leadership in, sustainability projects and environmental health. She dedicated much of her 6th grade year to organizing community service projects at the Genesee Community Charter School, including personally composting food wastes for the sixth grade class. Her confident example not only encouraged peers to join her in becoming agents of change, but also resulted in a proposal that the whole school commit to keeping compostable items from classroom lunches out of landfills. Roxana presented this proposal to reduce the school’s waste stream to the school’s Board of Trustees, and is awaiting their decision.

CEHN is pleased to award 2014 NOW Youth Leadership Awards to both Nathan and Roxana. Dr. Routt Reigart, founding chair of CEHN’s Board of Directors, comments: “Both of these deserving young individuals have shown extraordinary leadership and passion for environmental responsibility and health. It is amazing what they have already accomplished at the ages of 12 and 17 years. Their initiative represents exactly the kind of informed engagement needed from theirs and future generations to carry environmental stewardship forward and safeguard public and community health.” Nathan and Roxy will be honored alongside Dr. Richard Jackson of UCLA, CEHN’s Policy Award Winner, Dr. Tracey Woodruff of UCSF, CEHN’s Science Award Winner, and CEHN’s Community Award Winners at the Ninth Annual Child Health Advocate Awards Reception in Washington, DC, on October 6th. For more information about the awards event, and to register to attend, visit: https://www.regonline.com/CEHNAward2014.

The Children’s Environmental Health Network is a national multi-disciplinary organization whose mission is to protect the developing child from environmental health hazards and promote a healthier environment.