Global digital & alternative media revs grew 12% to $252B in 2013, pushing the global media economy over $1 trillion for the first time, according to new research from PQ Media. Key growth drivers have been the red-hot mobile juggernaut, online videogames, social videos, digital place-based networks, and word-of-mouth marketing. 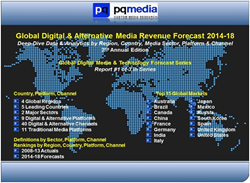 'D&A media revenues appeared to be supercharged by a mobile juggernaut. It's strong perceptual impact on growth and fear causes us to need centering across mobile channels,' said Patrick Quinn, President, PQ Media.

Defying strong headwinds at times, D&A media’s share of total advertising & marketing revenues accounted for 24.2% globally in 2013, nearly double its share in less than 10 years. Meanwhile, traditional media revenues inched up a mere 0.8% to $754.87 billion. The growth rates for D&A media, as well as traditional advertising & marketing, indicate decelerated expansion in 2013, due to economic worries that key emerging markets have faced in recent years.

Out of 40 D&A media channels defined in our taxonomy, online search remains the largest at $48.51 billion in operator revenues in 2013, while mobile search was the only channel to post a triple-digit gain for the year. Despite the sharp growth deceleration in 2013, global D&A media revenues increased at a CAGR of 12.7% during the 2008-13 period, outpacing traditional media growth and global economic expansion. While total D&A advertising revenues – including internet/online; digital & ambient outdoor media, mobile, and other digital ad channels – grew faster in the period (16.1% CAGR), the D&A marketing sector – comprising internet, consumer events, product placement, mobile, and word-of-mouth channels – is much larger with overall revenues of $136.37 billion in 2012, according to PQ Media.

The US became the first global market to exceed $100 billion in D&A media revenue, reaching $103 billion in 2013, nearly five times the size of second-ranked Japan. India was the fastest growing D&A market in 2013, up 21.3%, and one of 10 nations to post double-digit gains during the year, including the US, which expanded 12.6%. The UK had the highest D&A media share of its total media revenues at 30.6% in 2013, followed by Japan, Canada and Australia, and the US placing 7th seventh with a 26.5% share.

Global D&A media revenues were on pace in the first half of 2014 for a 13.7% increase for the full year to $286.70 billion, fueled with a biennial boost of incremental dollars mainly from the Winter Olympics in Russia and the World Cup in Brazil. Other key drivers include strong estimated growth of D&A media verticals, such as mobile advertising and digital signage. PQ analysts indicate that growth could be more robust, but for the mixed economic signals and inconsistent readings on key PEST components, including slow recoveries in large developed markets, such as the US and UK; economic headwinds in China and Brazil; and political tensions impacting Russia.

With austerity measures and stimulus packages driving estimated growth acceleration in many sluggish economies going forward, as well as the anticipation of deeper broadband, smartphone and tablet penetration, D&A media revenues are projected to rise at a 14.2% CAGR over the next five years to $489.76 billion in 2018. Influential developed and high-octane emerging markets stuttered in 2013, due to myriad challenges posed by debt issues, asset bubbles, political tensions and slower economic growth. Admedia also faced tough comps with 2012, due to the even-year bounce from major sporting and political events.

About the Series:
Global Media Intellicast Series 2014 is a three-report market intelligence suite designed to work synergistically to provide top executives with actionable data and insights they need to make smarter, faster business decisions. Each report is focused on one of three critical growth indicators: media operator revenues, consumer media usage, and consumer spending on media content & technology. To download free content and data or to save $500 on the new D&A Forecast by taking advantage of our Special Trial Offer by October 15.