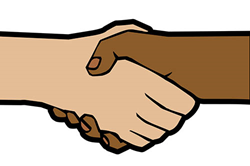 It's time to hit the ground running and make a difference here, not just keep talking on soapboxes.

After months of preparation, Hollywood 27 officially rolls out its END RACISM BLOG: THE DOUBLE TRUTH this week. According to the company, its blog's purpose is “to reduce all the noise and confusion continually surrounding the issue of racism, empowering each person to speak out and join the fight.”

Phoenix writer/filmmaker Eric Battersby creates the vast majority of content, and his mission is clear. “There are so many books, articles and blogs on racism today,” Battersby says, “with most of them either written specifically for a very well-educated demographic, or just written with too harsh or soft a tone. I think there is a very large void right now. Our End Racism Blog, and all the free guides plus the book coming out this Fall, they're all designed to reach as many people as possible. It's time to hit the ground running and make a difference here, not just keep talking on soapboxes.”

From mid-September on, readers can expect at least two new articles each week at Hollywood27.com, with other racism-fighting content on the way as well.

In addition to focusing on reach, Hollywood 27 also hopes to un-complicate the issue of racism itself. Battersby feels that the constant media circus and emotional responses create a feeling of despair, making the situation look even more difficult to overcome than it already is. “The biggest problem... I think we over-complicate the issue,” Eric continues. “I think over-complication is probably more rampant now than at any other time in the history of our civilization, and it needs to stop immediately, not just for fighting racism. It just makes people feel overwhelmed and powerless to change things, which isn't reality. Between The Double Truth at Hollywood 27, and the groundbreaking work we're soon kicking off with The Walk a Mile Project, things are about to change.”

Anyone interested in following that “change” can visit the blog at http://www.hollywood27.com/end-racism-blog/.

About Hollywood 27 Productions:    Formed in 1998, Hollywood 27 Productions is an independent film company focused on ending racism. With their feature film PYRITE (complete with free supplemental materials for hosting viewings and discussing racism), the END RACISM BLOG, and non-profit programs (run via Change The World Films), Hollywood 27 is one of the top sources in the world for learning about, and fighting against, racism. Visit Hollywood27.com for more details.