"Let us continue Christ's example of healing, educating, and helping the most vulnerable," Coptic Orphans founder and executive director Nermien Riad told the Sept. 9-11, 2014 summit of In Defense of Christians. 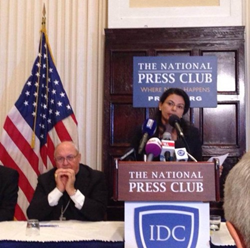 Our shared mission is to keep our Christian schools, hospitals, and NGOs running strong, as a vital, irreplaceable, and positive force for good.

Coptic Orphans founder and executive director Nermien Riad, speaking before the first summit of In Defense of Christians on Sept. 11, urged participants to "continue Christ's example of healing, educating, and helping the most vulnerable."

"It was an honor to speak at the first summit of In Defense of Christians, on whose advisory board I serve," said Riad, who presented at the event's "Changing Policy Through Awareness and Advocacy" panel. "Unity among Christians is critically needed today to confront the threats facing our brothers and sisters in Christ in the Middle East."

"I was particularly honored to speak at the In Defense of Christians summit with His Grace Bishop Angealos, General Bishop of the Coptic Orthodox Church in the United Kingdom. His statment on religious freedom was particularly powerful." said Riad, who founded Coptic Orphans, an award-winning Christian development organization, in 1988.

"As we celebrate Coptic Orphans' 25th anniversary this year, we are heartened by the positive changes in Egypt, but saddened by the terrorism and brutality afflicting Christians in other parts of the Middle East," said Riad.

The following is Riad's statement to the IDC press conference on Sept. 9:

"Beheadings, crucifixions, public stonings. It’s unbelievable that in 2014, Christians in the Middle East face these primitive atrocities. Faced with such horrors, knowing that we have friends and family who are suffering, we who live abroad are always asking ourselves, 'How can we defend Christians?' As we seek answers, we can begin by looking at Christ’s era and how He lived. Christ, too, lived in a time of upheaval and war, where armies marched to conquer. The expectation was that Christ, as the Messiah, would respond in kind. Yet instead, Christ chose to heal, to educate, and to help the most vulnerable. I would suggest that how Christ lived defines the word 'advocacy,' a life lived in response to violence, cruelty and intolerance – a life that we all strive to emulate.

"Now let’s look to the future. How many more millions of Christians will have greater security and better relations with their neighbors if we ensure that these institutions remain steadfast in their mission? While in some parts of the Middle East, violence prohibits such an approach, in other parts, such as Egypt, a window of opportunity exists that we need to take advantage of. One way to do that is by devoting more resources to these efforts. Coptic Orphans, for example, is increasing the resources for our Valuable Girl Project, which creates one-on-one mentoring for over 400 Muslim and Christian girls in seven sites across Egypt. By bringing people together so that they realize the humanity of a formerly faceless, nameless neighbor, the project topples walls of distrust in communities. Countless times we’ve heard from Muslim girls, 'Why do they tell us you are bad? You’re not bad.' Or, 'This is the Egypt I dream of, where we are all together.'

"In doing this work, we aim to follow the wishes of His Holiness Pope Tawadros II, who told me that Egypt needs more grassroots village services like the Valuable Girl Project that nurture tolerance and trust. 'We have forgotten how to love one another,' he said. I hear His Holiness’ words, in part, as a call for Christians to continue working through our schools, hospitals, and NGOs. I’d like to leave you with this type of call to action today. I submit to you that our shared mission is to keep our Christian schools, hospitals, and NGOs running strong, as a vital, irreplaceable, and positive force for good. Expanding such efforts would be smart in today’s hostile landscape, and most importantly, true to how Christ lived in an era not unlike our own, one of violence and upheaval in the Middle East.

"Let us continue Christ’s example of healing, educating, and helping the most vulnerable. It will be good for our Christian communities, good for our neighbors, and good for the homelands we love."

The Copts, Egypt's indigenous Christian community, have a faith stretching back to the first century AD. They are now a minority making up 10% of Egypt's population. An estimated 1.5-2.5 million Copts now live in the United States, Canada, Australia, the United Kingdom, and other countries.

Coptic Orphans is an award-winning international Christian development organization that unlocks the God-given potential of vulnerable children in Egypt, and so equips them to break the cycle of poverty and become change-makers in their communities. Coptic Orphans works through grassroots partners and volunteer networks to strengthen local communities for sustainable impact. Since 1988, Coptic Orphans has touched the lives of over 30,000 children throughout Egypt. Headquartered in Washington, DC, Coptic Orphans has expanded to offices in Egypt, Australia, Canada, and the United Kingdom. To learn more, visit http://www.copticorphans.org.