Congressman Murphy honored for being longtime friend of the U.S. hospitality industry 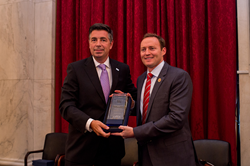 Rep. Murphy has co-sponsored three AAHOA-supported legislation in the past year: the Travel Promotion, Enhancement and Modernization Act of 2014, the Jobs Originated through Launching Travel Act and the Commercial Real Estate and Economic Development Act. All acts serve to promote small business ownership and to promote the hospitality industry.

“Congressman Murphy has been a longtime friend of the hospitality industry and recognizes the industry’s importance in the American economy,” said AAHOA Chairman Pratik Patel. “I am confident in saying that he is a friend of AAHOA and hoteliers across the nation.”

The Friend of the Hotelier award is given to public officials and community leaders who demonstrate extraordinary and persistent support of issues that serve to promote the hospitality industry and positively impact small business owners.

Founded in 1989, AAHOA is the largest hotel owners association in the world, with more than 12,500 small business owner-members. AAHOA members own more than 20,000 properties amounting to more than 40 percent of all hotels in the United States and employ nearly 600,000 workers, accounting for over $9.4 billion in payroll annually.