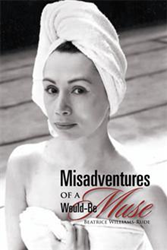 NEW YORK – Beatrice Williams-Rude’s mostly merry memoir chronicles her experiences as an innocent who arrives in Manhattan during the golden age of Broadway and TV in quest of a career in theater—or, dream number one, opera. “Misadventures of a Would-Be Muse” (published by Xlibris) details episodes in her life including the people with whom she crossed paths: famous and celebrated, powerful but infamous, financiers and frauds, lechers and protectors. She names those who helped and those who hindered.

A chorus kid, actress, singer and model, Williams-Rude was a contest-winning child pianist, having started to perform at age four in her native Philadelphia. She appeared on Broadway, off Broadway in summer stock doing both musical comedy and straight plays as well as on TV. After receiving three unpalatable stage offers –it was not the nudity, but rather the crudity, the grossness that turned her off – she returned to college, then entered the world of journalism as a copy editor and, later, researcher, reviewer and writer. In the winding course of her career and relationships, she has had “more names than a con-man,” as Mike Wallace laughingly noted.

“Misadventures of a Would-Be Muse” shows Beatrice Williams-Rude emerging from being “the droop of the third grade,” to seeking to be a supporting player—a muse—in other people’s movies, to the self acceptance to become a star in her own.

About the Author
Philadelphia born and bred Beatrice Williams-Rude now lives in Manhattan with her husband, Alan Rude. She is an active campaigner for humane treatment of animals, the abolition of torture of man and beast, and for world peace. The former actress and singer is an editor and writer whose most recent essays have been on behalf of the “big three” whistleblowers: Edward J. Snowden, Pvt. Bradley/ Chelsea Manning, and John Kiriakou.