Legal Printer Supreme Court Press Petition of the Month for Aug 2014: Can There Be Service of Process on the Dead?

The Wanda McClure Dry Petition Asks Whether She Was Denied Due Process Where an Important Legal Notice Was Mailed to Her Deceased Husband's Office, When the Law Requires Personal Service on Non-Parties 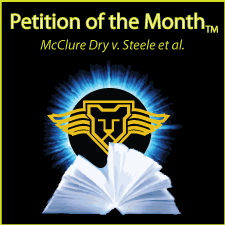 Appellate Printer Supreme Court Press has named McClure Dry v. Steele et al. (Supreme Court docket No. 14-180) as its August 2014 Petition of the MonthTM. They say that neither snow, nor rain can stop the US Postal Service from delivery. However, what happens when something is mailed to a deceased person? What if that item is an all-critical legal notice that is meant to be served upon living heirs and representives of the deceased person? According to papers filed with the Supreme Court, McClure Dry v. Steele et al. asks this very question. These documents paint a tragic scenario. Wanda Dry's husband Dr. Lawrence Dry had just passed away, leaving his legal suit against defendants Steele et al. in limbo. According to the petition, the defendants served a "Suggestion of Death" by mailing it to the deceased, instead of to her as widow or the adult children who were Dr. Dry's heirs. The filing of a Suggestion of Death is a prelude to a motion to dismiss, if the heirs do not file for substitution. It is a document of such importance that both the Tennessee and Federal Rules of Civil Procedure require personal service upon non-parties to the matter.

According to the petition, the Defendants mailed a Suggestion of Death to the deceased Mr. Dry's business address, and even then it is alleged they mailed it to wrong address. Mrs. Dry states that at the time she was notified of the motion to dismiss, the train was already barreling down the tracks. Mrs. Dry, herself an attorney and member of Supreme Court Bar, protested, asking for more time to properly notify heirs and obtain counsel. The lower court held that the 90 clock to the dismissal began with the mailing (which Mrs. Dry stated she did not receive) of the Suggestion of Death to the decedent's office and that personal service was not required.

The Petition provides a thorough detailing of the fierce conflict between various states and federal courts on this issue. The Third, Fifth, and Tenth Federal Circuits require identification of and personal service upon non-parties, while the Second Circuit does not. Colorado, along with a majority of states and circuits, sees the precedent as “unequivocal” in requiring personal service of interested non-parties To learn more about McClure Dry v. Steele et al. and hear more directly from Ms. Dry, visit http://www.supremecourtpress.com/Petition-of-the-Month/WandaDry-Petition-Aug-2014.html

If you have a pending petition that you believe is worthy of Petition of the MonthTM, you can email us at editor@supremecourtpress.com