Shedding Light on the Killer in Your Cabinet 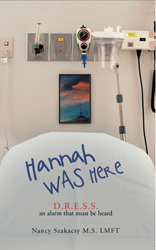 Parents, doctors, media- everyone needs to hear how this seemingly inconsequential acne medication is taking a terrible, tragic turn.

(PRWEB) October 07, 2014 -- Nearly 70 percent of Americans take at least one prescription drug, and more than half take two, according to a June 2013 Mayo Clinic study. The new book, "Hannah was Here" tells the story of Hannah Szakacsy, a young girl who was one of the 70 percent.

A teenage anti-bullying advocate who dedicated her life to helping others, Hannah was a vivacious girl on the cusp of adulthood when a common acne antibiotic caused her untimely death.

Hannah suffered from minocycline-induced Drug Reaction Eosinophilia Systemic Symptoms (DRESS), an autoimmune allergic reaction that caused her healthy immune system to attack itself. Doctors tried everything to save her, including two open-heart surgeries and the flaying open of both her legs. Hannah coded 11 times during her 102 days in critical care, ultimately succumbing two weeks after her 17th birthday.

Hannah’s mother, Nancy Szakacsy, dedicated her life to shedding light on minocycline, the most prescribed acne antibiotic in the country, and its dangerous association with DRESS syndrome. In “Hannah Was Here: D.R.E.S.S. an alarm that must be heard,” she offers an inside look at Hannah’s struggle for life, as well as the truth behind DRESS.

“It astounds me that U.S. physicians still prescribe this dangerous antibiotic for seemingly benign conditions like acne,” Szakacsy said. “The danger to our children far outweighs any possible benefits.”

Three years later, Szakacsy remains outspoken in the medical and family communities, asserting that DRESS should not be disregarded a rare syndrome.

“DRESS isn’t rare,” said Szakacsy, who is currently supporting the family of a critically ill student from Hannah’s old school who is fighting DRESS. “Parents, doctors, media- everyone needs to hear how this seemingly inconsequential acne medication is taking a terrible, tragic turn.”

“Hannah Was Here: D.R.E.S.S. an alarm that must be heard”
By Nancy Szakacsy
Available in softcover and e-book formats
Available on Amazon, Barnes & Noble, Google Books and AuthorHouse

About the author
Nancy Szakascy is a widely trusted and respected mental health expert who has been featured on Fox News, Hollywood 411, “The Thread” with Suzanne Somers and more. She regularly contributes to local and national radio and has provided psychotherapy to high-profile individuals in sports, music and television. Szakacsy is a licensed marriage and family therapist in California. Szakacsy and her husband of 28 years have two children and live outside Telluride, Colorado.