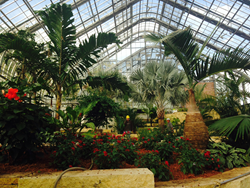 “The Marjorie K. Daugherty Conservatory will be a place for the community to enjoy year-round and will further our efforts to create a botanical garden with a deep sense of place...

The Marjorie K. Daugherty Conservatory, Omaha’s new, world-class conservatory, opens Saturday, October 11. In its entirety, the new addition adds almost 20,000 square feet to the existing visitor and education center, including 17,500 square feet of indoor space for horticultural displays. It will usher in a new era of horticulture for the Omaha metropolitan area and for the surrounding region and will be a place where plants will burst with life year-round. From lush tropical gardens with soaring palms and vibrant flowers to temperate gardens with moss-covered live oak trees and blooming azaleas, the conservatory will be a spectacular addition to our cultural landscape for all four seasons.

The extraordinatory efforts and exceptional generosity of those involved with creating these gardens under glass are truly remarkable,” said Spencer Crews, executive director of Lauritzen Gardens. “The Marjorie K. Daugherty Conservatory will be a place for the community to enjoy year-round and will further our efforts to create a botanical garden with a deep sense of place- both to display, educate and celebrate plants that are native to our part of the country, and plants that are seldom seen in our region.”

The Marjorie K. Daugherty Conservatory is a fitting tribute to an avid gardener and a woman who did much to cultivate growth throughout her life. The Robert B. Daugherty Foundation provided a generous lead gift to name the conservatory in honor of Robert’s late wife Marjorie (Marge), to honor the powerful connection that she had to nature and to the Omaha community. “This decision to honor our mother in this way was a natural one,” said Tim Daugherty. “Spending time in the garden and in nature gave her such joy and she had a deep-rooted interest in Lauritzen Gardens.”

The Robert B. Daugherty Foundation joined with many others in the community to generously support the effort.

“The many individuals and organizations that have supported this endeavor deserve our community’s deepest gratitude,” said Randy Blackburn, president of the Lauritzen Gardens board of directors. “Thanks to them, Omaha now has a four-season destination for horticulture, which will continue to provide memorable educational and aesthetic experiences for all.”

The addition of the conservatory significantly increases Lauritzen Gardens’ indoor display space and transforms the garden into a destination for all twelve months of the year. The conservatory will provide a lush, green oasis for visitors, even during the stark, bare Nebraska winter. “Though we’ve only just completed our thirteenth year of full-scale operations, the opening of the conservatory represents the garden becoming a mature public horticultural institution,” said Crews. “A conservatory raises the garden’s profile and Omaha’s profile, both regionally and nationally.”

Entrance to the Marjorie K. Daugherty Conservatory will be included with paid garden admission of $10 for adults, $5 for children 6-12 and free for children under 6 and garden members. It will be open daily from 9 a.m. to 5 p.m. during regular hours of operation, and will be closed on Thanksgiving, Christmas and New Years Day.

INSPIRED DESIGN
The forms found in the tropical heliconia flower, as well as Lauritzen Gardens’ own logo inspired the exterior design of the conservatory. Taking the logo’s arched shape as a base point, the conservatory emerges from the hillside in a series of extrusions, each smaller than the previous. The different bays all feature canopies that overhang in alternating directions, mimicking the organic shapes seen in a budding heliconia, and the ridgelines all angle upwards, to visually evoke the idea of growth from the hillside. Though simplistic in its materials, the steel framing and 12,000 glass panels will allow the conservatory to function as an optimal plant growing environment, to foster plants that would not survive in our local climate. The conservatory is designed to complement the existing visitor and education center, using similar elements such as natural stone and stucco to seamlessly weave the visitor and education center and the conservatory into the green tapestry of the garden.

With the visual appearance the glass structure is growing from the hillside, the conservatory’s uniqueness lies in the gradual twenty-foot rise in elevation that visitors experience from the entry to the northern end. This provides surprises around every corner, including a ten-foot waterwall, dramatic glimpses of the contrasting conservatory plantings, a large pool with exotic water plants- and culminates with an outlook over the beautiful Missouri River valley and the entrance to the garden’s woodland trail, a century-old forest in the middle of the city.

Unlike most conservatories today, which interpret ecosystems or focus on specific plant communities, the Marjorie K. Daugherty Conservatory will focus on what Lauritzen Gardens does best, gardens. Older conservatories were built as garden settings or plant collections of exotic plants that were displayed in a gardenesque way. The interior of the conservatory at Lauritzen Gardens is inspired by these historical conservatories, and is designed to showcase the beauty of a traditional garden in the southern United States in the 5,300 sq. ft. temperate house and collections of elegantly displayed tropical plants in the 10,000 sq. ft. tropical house. A 2,000 sq. ft. gallery space for unique floral displays and private/special events makes up the remainder of the conservatory space.

PROJECT BACKGROUND
The development and opening of the conservatory realizes a vision established by the garden’s founders in the early 1980s. Their plan included outdoor garden areas that celebrated native plants, but also included the idea of a dramatic four-season conservatory that would contain a fantastic collection of unusual plant life, not native to our area and seldom seen by our community. In 1996, the conservatory became a permanent part of the garden’s master plan for growth. In 2010, a feasibility study was conducted that assessed the need and viability for a conservatory in Omaha. The results launched the efforts that led to the building of the Marjorie K. Daugherty Conservatory. Heritage Services, Inc started the fundraising campaign in 2011. New plans were drawn by HDR, Inc. in 2012. Ground was broken on the project in April 2013, with site preparation and construction beginning right afterward.

WOODLAND TRAIL REOPENS
The opening of the Marjorie K. Daugherty Conservatory also marks the re-opening of the ten-acre woodland trail, Lauritzen Gardens’ century-old grove of bur oak forest. The paved paths inside the conservatory will culminate at the new entrance of the woodland trail, allowing easy access for visitors. The woodland trail provides an escape into unfettered nature with the convenience of a mulched path, winding past a native plant community that includes: American hophornbeam, gooseberry, Kentucky coffee tree, shagbark hickory, and other plants of interest, creating a dramatic contrast to the cultivated garden areas. The woodland trail also provides incredible panoramic views of the Loess Hills, Missouri River and Omaha skyline.

Lauritzen Gardens is open from 9 a.m. to 5 p.m., and the café serves lunch from 10 a.m. to 2 p.m., every day except Thanksgiving, Christmas and New Year’s Day. Admission to Lauritzen Gardens is $10 for adults and $5 for children ages six to 12 and free for members and children younger than six years old.

Lauritzen Gardens is conveniently located in the beautiful riverfront hills at First and Bancroft Streets and is close to the Henry Doorly Zoo & Aquarium and the Old Market. For more information, please visit http://www.lauritzengardens.org or call (402) 346-4002.

A rendering of the conservatory from the southeast

A view in the 10,000 sq. ft. tropical house of the Marjorie K. Daugherty Conservatory