Hands-on with SumBlox, a STEM toy that is reinventing math learning

Building blocks are back! For the first time in history, SumBlox Math Building blocks have taken number value and tied it directly to the height of each numeric symbol in one amazing stackable building block. 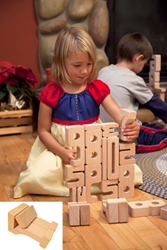 Snow White building a cottage and some beds with SumBlox

"One of the best products I have ever seen to help children learn about numbers and basic arithmetic."

Today while sitting down with young Snow White, Dave Skaggs asked what she was building. She had started to create a wall out of SumBlox, each column adding up to precisely 18. She grabbed a 7 and took a pause. Dave asked (being a guy), “What are you building, is that a castle and some catapults?” “Nooo!” She replied sharply. “Those aren’t catapults, those are beds!” A roar of laughter could be heard from the room. Of course Snow White would be making beds! And by the look of it, she has four more to go.

Kids are so creative! They see solutions to problems in the most unlikely of places and they can make magic out of the simplest of things.

With SumBlox, kids are given a set of blocks that naturally encourages them to utilize mathematics to problem solve and create. For instance, the fastest way to put together a wall or create a tower is to know its number height and look for similar combinations. See the video here: (http://bit.ly/mSumblox).

Through play, kids collaborate, teaching each other as they ask for a number by name (number recognition) or find new number combinations that add to the group’s structure. The more they play and associate FUN memories with each number, the easier it becomes to recall number attributes, addition combinations, subtraction patterns, or even the height of multiple like-numbers (multiplication).

In the classroom, SumBlox provides teachers with step-by-step lesson manuals to guide students through hands-on learning activities. Each lesson has been crafted by an experienced teacher who has had amazing success using them in her own classroom.

Until now, the SumBlox Team has been making these blocks by hand. The blocks are in the Children’s Museum of Houston and the Boston Children’s Museum and have been tested in homes and schools in the greater Dallas area. SumBlox has also been featured in Forbes and is endorsed by renowned mathematician and author Professor Keith J. Devlin, as "One of the best products I have ever seen to help children learn about numbers and basic arithmetic."

Now, for the first time ever, SumBlox are available for pre-order on Kickstarter.com. To celebrate SumBlox’s launch, follow the link below and reserve your own set of SumBlox at a special Kickstarter price (30-40% off). Available until October 26th.
http://bit.ly/mSumblox

SumBlox Tower of TenKids building a tower using combinations of 10.

SumBlox ConceptEach number increases in height by 1, showing the value of each numeric symbol with height.