Judith J. Miller’s First Book, “From Beginning to End and Back Again,” is a Unique and Reflective Work Full of Thoughtful Meditations

New book “From Beginning to End and Back Again” from Page Publishing author Judith J. Miller is the mesmerizing story of a mother’s loss and the unfortunate road to closure that leads through many difficult times, the most arduous being acceptance. 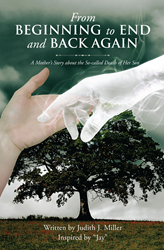 Judith J. Miller, whose writing experience comes from years of writing commercial copy throughout her radio career, has completed her first book “From Beginning to End and Back Again,” a chilling and potent story of a mother’s loss of her son and her struggle to distinguish grief from imagination as she feels his presence still.

The book written about the death of her only child did not come easily - at least not until the painful event was dealt with through writing. When presented with the original idea of writing the story of this experience, Ms. Miller thought to herself, "Me? Write a book? I don't know how to write a book. All I've ever written was song lyrics, poetry and radio copy. How could I ever write a book?" The suggestion was heard as a gentle voice speaking in her right ear one afternoon, shortly after the death of her only child, a son named Jay.

Published by New York City-based Page Publishing, Judith J. Miller’s poignant tale is a vivid window into the pain which the human soul can endure and triumph over. The loss of a child is the topic Miller delves into with her heart doing the majority of the writing as she struggles through what she believes to be her son communicating to her from the afterlife.

Judy lost her son to a tragic accident in the Bahamas. Her only son, Jason, perished with two others while diving in one of the blue holes in the Abacos. Months after the accident, Judy tried getting her life back, but the pain of losing a great part of her still lingered. While she mourned, Judy began having visions about her son and hearing sounds that initially confused her and made the people around her think she was going crazy. Could she really be communicating with her son in the spiritual realm?

Readers who wish to experience this chilling work can purchase “From Beginning to End and Back Again” at bookstores everywhere, or online at the Apple iTunes store, Amazon, Google Play or Barnes and Noble.