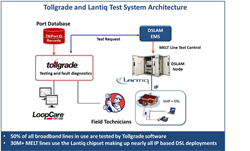 This is a high-speed data driven world. As broadband service providers roll out NGN networks, it is imperative that they not lose the testing capability the industry has come to trust as its standard over the last two decades.

Half of all existing broadband lines in use today are tested using Tollgrade’s OSS software and more than 30 million shipped MELT lines use the Lantiq chipset (which represents nearly all IP-based DSL deployments today). With this partnership, customers benefit from the market leading expertise position of both companies as they migrate to Next Generation Networks to improve DSL performance.

“As broadband service providers continue migrating network infrastructure towards NGN architecture, the introduction of efficient and seamlessly integrated line testing software and chipsets is paramount. With Lantiq’s MELT chipsets, carriers can perform PSTN-grade line testing even in all-IP networks. Single infrastructure IP-based networks for voice and data transmission require accurate measurements that can be directly performed, elaborated and processed by the Lantiq/Tollgrade offering.”

Key Benefits of the Partnership:

Tollgrade and Lantiq will preview these new DSL testing capabilities at the Broadband World Forum in stand C10 at the RAI Exhibition & Convention Centre, Amsterdam. The companies invite the press, media and public to attend a demonstration of the integrated hardware/software solution. For more information visit http://www.lantiq.com/MELT or contact getLoopcare(at)tollgrade(dot)com.

About Lantiq
Lantiq, a leading supplier of broadband access and home networking technologies, offers a broad and innovative semiconductor product portfolio for next-generation networks and the digital Home.