Edgar Rice Burroughs, Inc. will be seeking a new studio to continue this seminal Sci-Fi adventure, John Carter of Mars. Rights have reverted back from Disney. 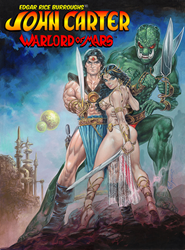 ...we hope to have JOHN CARTER OF MARS become another major franchise to entertain world-wide audiences of all ages.

“John Carter of Mars was the creative stimulus behind such movie classics as Superman, Star Wars and Avatar,” said James Sullos, President. “Edgar Rice Burroughs was the Master of Adventure and his literary works continue to enjoy a world-wide following. We will be seeking a new partner to help develop new adventures on film as chronicled in the eleven Mars novels Burroughs wrote. This adventure never stops. Along with a new TARZAN film in development by Warner Bros., we hope to have JOHN CARTER OF MARS become another major franchise to entertain world-wide audiences of all ages.”

About Edgar Rice Burroughs, Inc.
Founded in 1923 by Edgar Rice Burroughs himself, Edgar Rice Burroughs, Inc. holds numerous trademarks and the rights to all literary works of the author still protected by copyright. The company has overseen every adaptation of his literary works in publishing, film, television, theatrical stage productions, licensing and merchandising. The company is still a very active enterprise and manages and licenses the vast archive of Mr. Burroughs' literary works, fictional characters and corresponding artworks that have grown for over a century. The company continues to be owned by the Burroughs family and remains headquartered in Tarzana, California, the town named after the Tarzana Ranch Mr. Burroughs purchased there in 1918 which led to the town's future development. For more information, please visit EdgarRiceBurroughs.com.